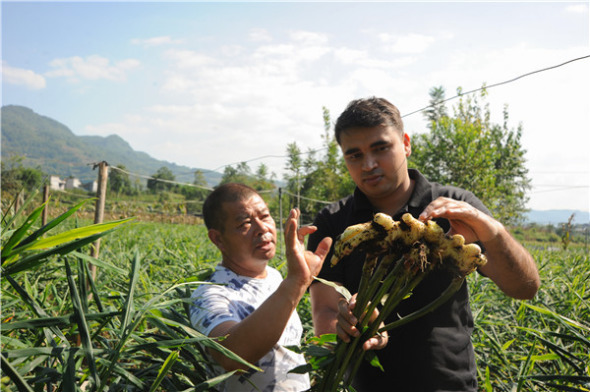 A 32-year-old Indian man who cultivates ginger with his Chinese father-in-law in Hubei province plans to promote their experience across their county to help local residents live a better life.

The man, originally from New Delhi, gave himself a Chinese name, Wang Wei. It's the same name as one of the most famous poets of the Tang Dynasty (618-907), and he said he chose it because he has long appreciated Chinese culture. His Indian name is Kottuvala Abdul Mateed.

Mateed, who studied at China Three Gorges University in Hubei, has lived in China for 12 years. He fell in love with Lyu Xueqin, a woman from Enshi Tujia and Miao autonomous prefecture in Hubei, who became his wife.

In 2016, he and his father-in-law, Lyu Weiping, took a trip to Shandong province to learn about ginger cultivation techniques. They returned to their town in Jianshi county with some good quality rhizomes to plant as a test, which was successful. They set aside all 8,000 kilograms of ginger they harvested for cultivation and decided to plant 2.1 hectares in the crop. He took charge of financial support and sales.

Mateed said the ginger output of the planted area can reach nearly 100,000 kilograms, valued at 1 million yuan ($157,750) as long as proper technology and management are used.

Lyu Weiping, the father-in-law, said that thanks to Mateed, they plan to expand the area they have planted in ginger to 33.3 hectares next year and promote the experience across the county in the following five years. "Everyone then could make more money," he said.

Mateed said they promised to purchase all the ginger the other farmers grow. "They used to earn less than 500 yuan for cultivating a mu of rice but now earn 5,000 yuan for growing ginger there." One mu, a measure used in China, is about 0.07 of a hectare.

"The area we planted with ginger created job opportunities and enabled us to pay over 200,000 yuan in annual combined salary to the farmers who work here," he said.

"What he's done is connecting our hometown with the rest of the world and it benefits our fellow villagers a lot," Lyu Xueqin said.

The family's business has received support from the local government, which arranged experts from universities to provide guidance and helped them construct a cellar, which can store 150,000 kilograms of ginger.

"The huge market and friendly investment environment in China provide so many opportunities for foreigners like me or even our next generation to fulfill one's potential and realize their own dreams," he said.

The couple last year established a company in Guangdong province to export agricultural products, including ginger, to countries such as India, Saudi Arabia and the United States.

"I've told my older brother a lot about my ginger business in China. He's so inspired that last year he came to visit our farm and export company, and is really looking forward to starting his own business in China," Mateed said.