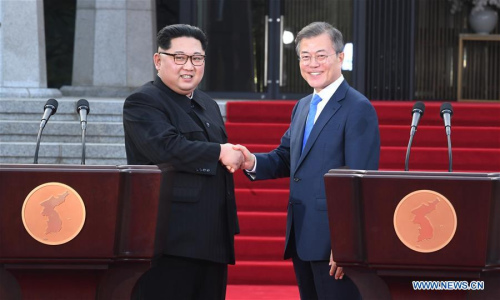 The meeting on Friday between Kim Jong-un, leader of the Democratic People's Republic of Korea, and Moon Jae-in, president of the Republic of Korea, was hailed by the international community as a milestone event that might bring an end to decades of conflict on the Korean Peninsula.

The two leaders signed a joint declaration confirming their common goal of complete denuclearization of the Korean Peninsula after their meeting on the ROK side of the border village of Panmunjom. Kim became the first DPRK leader to set foot in ROK territory since the end of the 1950-53 Korean War.

The meeting on Friday was the third such summit, 11 years after the previous one. The first two summits took place in Pyongyang in 2000 and 2007.

Kim and Moon agreed to push for talks, which also involve China and the United States, to establish permanent peace by turning the current armistice agreement into a peace treaty and declaring an end to the Korean War this year, marking the 65th anniversary of the signing of the armistice agreement.

Beijing applauded the historical step taken by the leaders of Seoul and Pyongyang and said it appreciated their political decision and courage.

China also calls for all relevant parties to keep the momentum of dialogue and jointly promote denuclearization and political settlement of the issue, Lu said, adding that China would like to continue to play a positive role in this regard.

The White House said in a statement that it looks forward to continuing robust discussions in preparation for the planned meeting between U.S. President Donald Trump and Kim Jong-un in the coming weeks.

Zhang Liangui, a Korean studies expert at the Party School of the Central Committee of the Communist Party of China, said the easing of -tensions between the two is not only in line with the interests of the people of the peninsula, but also in line with the consensus of the international community.

"The Kim-Moon summit set up a good start in discussing denuclearization, and hopefully it can lay the good foundation for the future Kim-Trump summit, as the U.S. factor still has an important influence on the Korean Peninsula," Zhang said.

While enjoying the improvement of relations, Zhang added, it must not be forgotten that the crux of gaining permanent peace on the Korean Peninsula is to achieve denuclearization. Zhang said true peace and stability can only be maintained after taking pragmatic steps to resolve the nuclear issue.

Experts worldwide also believe that the Kim-Moon meeting is an important move to promote permanent peace on the peninsula.

Kim's meetings with President Xi Jinping and President Moon demonstrate a more vigorous diplomatic approach and are encouraging signs that he believes dialogue is the best way forward, said Colin Alexander, a senior lecturer on political communications at Nottingham Trent University in the UK.

Tat Yan Kong, a researcher at the University of London, said the inter-Korean summit will demonstrate to the U.S. that there's strong public sentiment for peaceful means to resolve issues.

Jon Taylor, a U.S. professor of political science of the University of St. Thomas in Houston, said China has always insisted that the goals should be to achieve denuclearization and maintain peace and regional stability through dialogue and negotiation.

China has advocated the resumption of talks and a "dual-track" approach — advancing denuclearization and simultaneously establishing a peace regime. "We are now beginning to see this come to fruition," said Taylor.