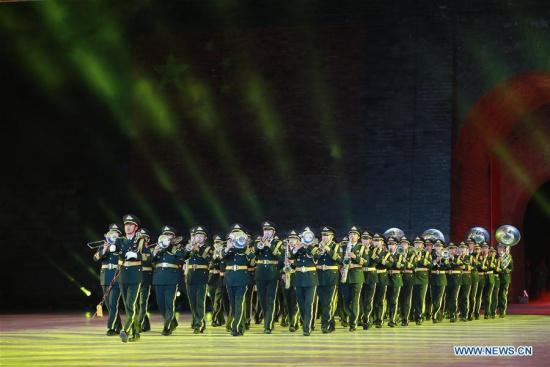 The military band of the Chinese People's Liberation Army (PLA) perform at the opening ceremony of a military band festival of the Shanghai Cooperation Organization (SCO) at a square of the Juyongguan Pass of the Great Wall in Beijing, capital of China, April 24, 2018. Military bands from eight countries, namely China, Kyrgyzstan, Pakistan, Russia, Tajikistan, Uzbekistan, India and Belarus, took part in the fifth SCO military band festival. (Xinhua/Ju Zhenhua)

The Shanghai Cooperation Organization (SCO) has held military musical performances at the foot of the Great Wall.

Thousands attended the opening of "Fanfare for Peace - 2018 SCO Military Tattoo V," staged at the Juyongguan section of the Great Wall in suburban Beijing Tuesday night.

"The location is the biggest highlight," said Cheng Daming, art director of the People's Liberation Army (PLA) band. "It was the first time the SCO military tattoo has come to the Great Wall."

Since 2014, the tattoo has been a fixture of SCO military cultural exchanges.

Cheng said the Great Wall is the pride of the Chinese nation.

The opening ended with a joint performance involving all eight bands.

They played "The Great Wall," a piece composed for this year's event, "Glorious Triumph," a classic of the PLA military band, and "Fanfare for Peace," the theme music of the SCO military tattoos.

On Wednesday, more performances took place at the Great Wall. A parade of military bands was also held at the Beijing Olympic Park.

"Music goes beyond borders and can promote exchanges of feelings between people," said Siarhei Kastsiuchenka, head of the central military band of Belarus. "In Belarus, Chinese culture is very popular and many young people are studying Chinese."