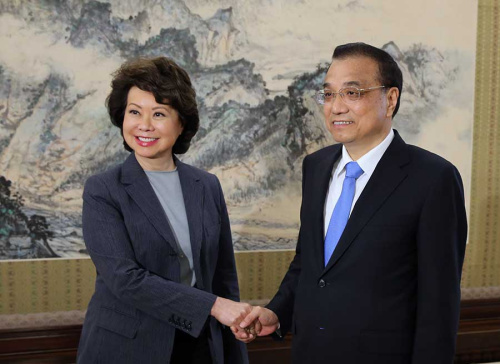 Premier Li Keqiang shakes hands with US Secretary of Transportation Elaine Chao at the Zhongnanhai leadership compound in Beijing on Thursday. Chao congratulated Li on China's economic performance in continuing to maintain a high growth rate. She also said she hopes the two nations will reach a positive outcome in trade and economic talks. (Photo/China Daily)

China considers it significant that the United States has recently indicated that trade friction should be dealt with through dialogue and communication, and will keep the door open for negotiation, Premier Li Keqiang said.

Li made the remark when meeting with U.S. Secretary of Transportation Elaine Chao in the Zhongnanhai leadership compound in Beijing on Thursday afternoon.

Mutual benefit and win-win results are the essence of trade and economic cooperation between China and the U.S., Li said.

He said that sitting down for dialogue is the only way to successfully deal with trade frictions facing the two nations.

Noting that President Xi Jinping and U.S. President Donald Trump have had many conversations, both in person and over the phone, Li said the two countries should implement important consensuses reached by the two leaders and work together in the spirit of mutual trust, mutual respect and consultation on an equal footing to reduce differences.

He added that China is willing to push forward pragmatic cooperation with the U.S. regarding transportation, including autonomous vehicles.

The premier also said that China, with huge market potential, will firmly further its opening-up and hopes all countries, including the U.S., will take advantage of opportunities created by China's opening-up efforts.

Chao congratulated Li on China's economic performance in continuing to maintain a high growth rate. Relations between China and the U.S. now stand at a critical stage of development, she said, and she added that she hopes both countries will reach a positive outcome from trade and economic dialogue and promote pragmatic cooperation.

Chao is leading the U.S. delegation participating in talks as part of the China-U.S. Transportation Forum in Beijing. The forum, established in 2008, facilitates partnerships and bilateral dialogue in areas of mutual interest.

The meetings have focused recently on automated vehicles and infrastructure development.

At a meeting on Thursday, Chao said she hopes the forum will "strengthen the discussion between our two ministries and contribute to a long-term relationship that is constructive and results-oriented".