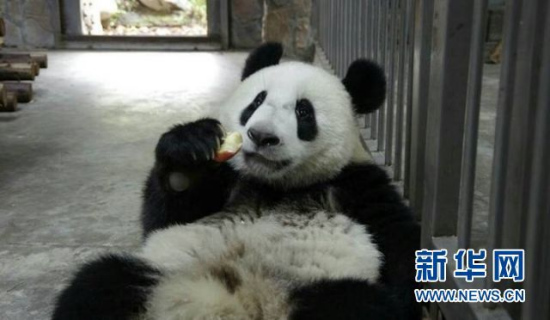 The panda, Cheng Jiu, will receive two hours of rehabilitation every morning in his enclosure at a zoo in Hangzhou, according to the Chengdu Research Base of Giant Panda Breeding in southwest China's Sichuan Province.

Last month, the four-year-old panda had the surgery for acute stomach distention, the first time the surgery has been conducted on a panda. He has survived three dangerous bouts of gastric reflux since the surgery.

The panda's keeper monitored him eating less and suffering from low energy in late February.

Veterinarians at the zoo and the panda base as well as doctors from Sir Run Run Shaw Hospital in Hangzhou conducted a group consultation to diagnose the illness and formulated a plan to operate.

According to the base, it was the world's first stomach incision surgery to eliminate indigestible food on a giant panda.

A four-member team from Zhejiang Provincial Hospital of TCM prescribed medication for the panda. "He is more than 100 kg, so we gave him a high dosage three times that used for an adult human, and blended the medicine powder into his bamboo," according to doctor Xu Zhiying.

It was for the first time a panda has been treated with a combination of Western and Chinese therapies, said Zhang Shuo, deputy head of the hospital.

The panda was healthy before the base sent him to Hangzhou Zoo in September, 2016.