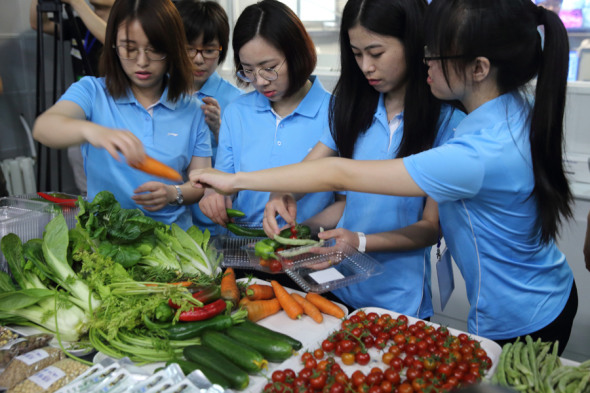 Produce grown in the Lunar Palace 1 Bioregenerative Life-Support Laboratory in Beijing is shown by experiment assistants at the project's conclusion on Tuesday. It was the world's longest experiment in a self-sustaining ecosystem. (WANG JING/CHINA DAILY)

The world's longest experiment in a self-sustaining ecosystem drew to a close on Tuesday in Beijing. It is part of an effort to explore ways to support life in extended missions on extraterrestrial bodies such as the moon and Mars.

Four volunteers－two men and two women who are students at Beihang University in Beijing－walked out of the Lunar Palace 1 Bioregenerative Life-Support Laboratory at the university, completing the Lunar Palace 365 experiment.

One of the two groups of volunteers stayed in the lab for a record-breaking 200 days of the 370-day experiment.

They shared vegetables and fruit they planted in the lab with participants in a ceremony outside the facility. Researchers in the program, officials from China's space authorities and university heads attended the event.

Professor Liu Hong, director of the Research Center of Space Life Science and Life Support Technology at Beihang, who heads the project, called bioregenerative life-support technology highly sophisticated and essential for long-term stays on extraterrestrial bodies. She said the experiment was successful in verifying the lab's overall design and reliability, determining such experiments' impact on humans' physical and psychological condition and exploring ways to support extended stays in enclosed ecosystems.

Liu Hui, one of the students who volunteered, said they all got along well and were kept busy with their various tasks and technical assignments.

Next, the project team will begin research and development on small bioregenerative life-support instruments to be carried by the nation's lunar and Martian probes, Liu said. In-orbit experiments will help designers demonstrate and optimize related technologies, she said.

Fang Jiancheng, vice-president of Beihang, said the university would accept foreign volunteers, especially students and space fans, who wish to take part in such programs.

The Lunar Palace 365 experiment, which started on May 10 last year and ended after 370 days, was designed to see how the bioregenerative life-support system, in which animals, plants and microorganisms coexist, works in a simulated lunar environment. Water and food can be recycled within the system, creating an Earth-like environment.

The Lunar Palace 1 provides an environment like Earth's biosphere and can support four people. The 500-cubic-meter lab is hermetically sealed from the outside environment and the volunteers were not to leave except in case of emergency. It consists of three cabins－one for volunteers to live in and control the whole facility and other two used to simulate cultivating plants on the moon－and a total area of 150 square meters, according to Beihang.

The volunteers planted grain such as wheat and corn and dozens of types of produce like carrots, tomatoes, mushrooms and cucumbers. Their harvest was part of their diet. They also grew mealworms that they processed into a source of protein, cooked with a little oil and water.

The second group completed a 200-day stay, breaking a world record set in the former Soviet Union when three people stayed for 180 days in a similar closed system in the early 1970s.