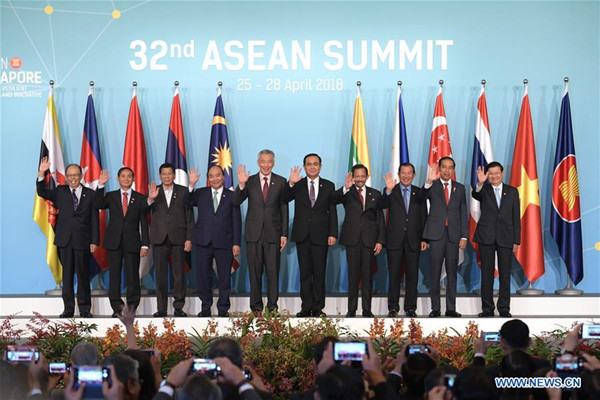 ASEAN leaders pose for a group photo during the opening ceremony of the 32nd ASEAN Summit held in Singapore on April 28, 2018. The 32nd summit of the Association of Southeast Asian Nations (ASEAN) concluded in Singapore Saturday, reaffirming the bloc's cooperation and common vision. (Xinhua/Then Chih Wey)

The 32nd summit of the Association of Southeast Asian Nations (ASEAN) concluded in Singapore Saturday, reaffirming the bloc's cooperation and common vision.

Singapore's Prime Minister Lee Hsien Loong said ASEAN leaders have adopted deliverables which are in line with the priorities this year for ASEAN to strengthen its resilience and innovative capacity.

At the press conference after the summit, Lee said one deliverable is the ASEAN Leaders' Vision for a Resilient and Innovative ASEAN, and the second is the establishment of the ASEAN Smart Cities Network.

The network will use technology to improve lives and livelihood of the people in cities across all the ASEAN member states, according to Lee.

The third one is the ASEAN Leaders' Statement on Cybersecurity Cooperation to deepen regional cooperation and coordination to keep up with the rapid pace of digitalization.

Lee said he is also pleased to announce the finalization of the Model ASEAN Extradition Treaty (MAET), the revitalization of the Singapore-ASEAN Youth Fund, and the set-up of an annual training workshop in Singapore, called the ASEAN Law Academy programme.

The ASEAN leaders have good discussions during their meeting on regional issues and ASEAN's external engagements, according to Lee.