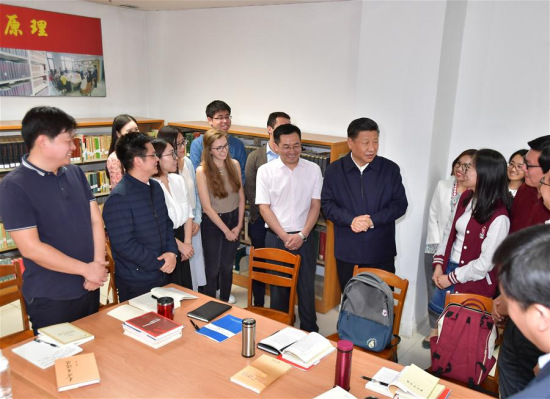 Chinese President Xi Jinping, also general secretary of the Communist Party of China Central Committee and chairman of the Central Military Commission, joins a group of Chinese and foreign students who are discussing topics related to interpreting the "new era" at the School of Marxism of Peking University (PKU) in Beijing, capital of China, May 2, 2018. Xi made an inspection tour of PKU on Wednesday. (Photo/Xinhua)

Scholars, students and university officials are drawing inspiration from the speech President Xi Jinping made in his visit to Peking University about boosting China's innovation on its own and improving the country's talent lineup.

In an inspection of the prestigious Beijing university on Wednesday, Xi called for building world-class universities with Chinese characteristics to nurture well-prepared graduates.

The visit was made ahead of China's Youth Day and the 120th anniversary of the university, both on Friday.

At a symposium with university faculty and students, Xi called for nurturing lots of talent in areas like strategic sciences, leading industries and innovation teams capable of becoming pioneers on the global stage.

The researchers should boost the country's self-reliance in the process of making major technological breakthroughs, and they should produce innovative outcomes that can serve the nation's development, Deng said.

Zou Ruiyang, a graduate student at Peking University's School of Government, said, "The general secretary's comments make me feel that the matters of this country and this nation are also the business of our youth."

In his tour on Wednesday, Xi also visited the university's School of Marxism.

Xi encouraged the students' serious studies on socialism with Chinese characteristics in connection with changes in the Party, the country and the world to produce more influential and convincing research.

Pan Jin'e, a senior expert in Marxism and socialism studies at the Chinese Academy of Social Sciences, said the university is the cradle where Marxism started to spread in China. Xi's visit to the Marxism school shows that the country values theoretical studies on Marxism.

"This will inspire young people to make technology better serve socialism with Chinese characteristics, and it will boost the use of Marxism in navigating technological research for innovation," Pan said.

Lin Jianhua, president of Peking University, said teachers and students will fulfill the goals proposed by Xi, make new discoveries and come up with new ideas, pioneer scientific and futuristic technologies and offer powerful support to the country's development.