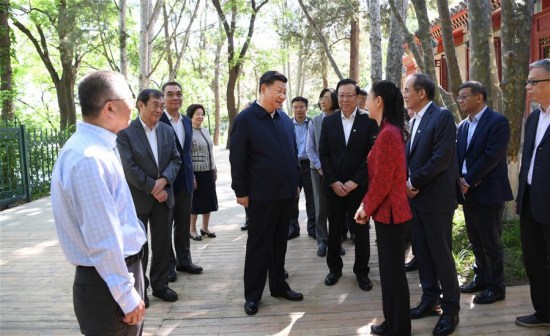 Chinese President Xi Jinping, also general secretary of the Communist Party of China Central Committee and chairman of the Central Military Commission, is briefed about the latest development of Peking University (PKU) at PKU in Beijing, capital of China, May 2, 2018. Xi made an inspection tour of PKU on Wednesday. (Xinhua/Yao Dawei)

President Xi Jinping extended Youth Day greetings to a group of students at China University of Political Science and Law and encouraged them to contribute to advancing law-based governance.

Members of the Communist Youth League of Class 1502 of the Civil, Commercial and Economic Law School received the greetings from Xi, who is also general secretary of the Communist Party of China Central Committee and chairman of the Central Military Commission, ahead of Friday's celebration of China's Youth Day.

Xi asked some staff members at the college to extend his greetings, in which he spoke highly of the students' firm determination of "remaining true to the original aspiration and practicing the belief of following the Party's steps for a whole lifetime".

The president encouraged the students to uphold their beliefs, maintain good virtues, cherish time and be diligent in their studies.

Xi said the students should pursue the goal of becoming capable and responsible people who are well prepared to join the socialist cause and contribute wisdom and strength to the Chinese Dream of national rejuvenation.

On May 3 last year, Xi visited the university, where he attended an activity with the theme of "remaining true to the original aspiration and following the Party's steps".

The activity was planned and attended by members of the Communist Youth League of Class 1502.

The students of the Communist Youth League branch of the class wrote a letter to Xi recently in which they said that they remember Xi's instruction and are taking concrete actions to keep their promise of "remaining true to the original aspiration and following the Party's steps".

The students told the president that through such activities as promoting knowledge of the law and volunteering to teach in rural areas, they have strengthened their belief in following the Party's steps and contributing to the country.