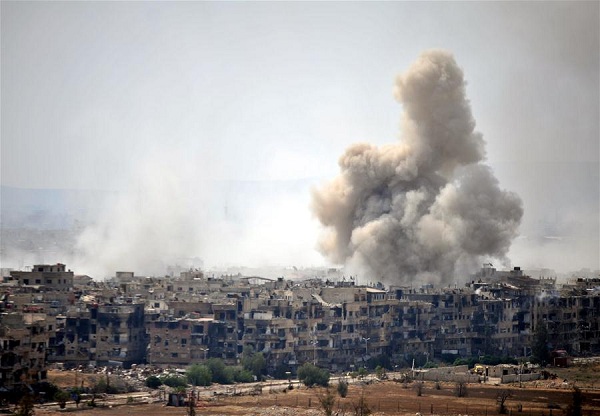 Photo taken on April 29, 2018 shows smoke rising from the Islamic State militant's positions in the Hajar al-Aswad neighbourhood, south of Damascus, Syria. The Syrian army captured the IS-controlled areas in al-Qadam on Saturday, according to the state news agency SANA. (Xinhua/Ammar Safarjalani)

Deals were reached on Sunday for the evacuation of rebels from the southern outskirts of Damascus, as the battle on the Islamic State (IS) group is ongoing until the full liberation of rebel-held areas.

The deal was reached between the rebels and the Syrian army in the towns of Yalda, Babila and Beit Sahem in the south of Damascus, and it will see the evacuation of rebels and their families towards rebel-held areas in the northwestern province of Idlib.

The evacuees will only be allowed to have light weapons, said the report, adding that the Syrian government's institutions will be re-established in the three towns after the process is completed.

Still, the report spelled no detail on the exact time of the evacuation, saying that the process will start once the arrangements are completed.

Those areas have for long been out of the conflict zone, as the Syrian army concluded a truce with various rebel groups in these towns in 2014, and since then the Syrian government has been trying to turn the deal from a truce to reconciliation, which will allow the government to enter those areas and take control.

The deal comes as the Syrian army launched a crushing offensive against rebel-held areas in southern Damascus.

A day earlier, the Syrian army fully secured four neighborhoods in southern Damascus after battles with the IS militants and closed in on a key bastion of the terror-designated group in that part of the capital.

The Syrian army fully captured the neighborhoods of al-Qadam, Mazaniyeh, Asali, and Jourah, from IS around the Hajar al-Aswad and the Yarmouk Camp areas, as the two areas are the major bastions of IS south of Damascus.

IS has lost its major stronghold late last year, with the Syrian army capturing Deir al-Zour city in eastern Syria as well as large swathes of the Syrian desert near the Iraqi border. The Kurdish-led Syrian Democratic Forces (SDF) also stripped IS of its de facto capital of Raqqa north of Syria.

Later in the day, the state TV said another deal was reached for the rebels to evacuate the Yarmouk Camp area, adding that the evacuation will start on Monday with buses entering the area after midnight Monday.

The rebels in the area will also depart for the rebel-held areas in Idlib, and in return, the rebels in Idlib will break a siege imposed for years on the pro-government towns of Kafraya and Foa in Idlib's countryside.

About 1,500 rebels, out of a total of 5,000, from Kafraya and Foa will be evacuated as the first step of the deal, the report said.

Under the deal, the rebels will release 85 kidnapped people from the town of Eshtabraq.

However, the state TV report stopped disclosing further details on the names of the rebel groups that will evacuate Yarmouk Camp, 75 percent of whom are under the control of the IS militant group.

The camp houses a large population of Palestinian refugees in Syria, but it has been inhabited by both Palestinians and Syrians.

In 2015, IS took over large areas of the camp. The rest of the area is believed to be controlled by the al-Qaida-linked Nusra Front.

The Syrian army has been on a crushing offensive on the Yarmouk Camp and the adjacent Hajar al-Aswad area to drive out IS militants, after the terror-designated group rejected a previous deal to evacuate these areas earlier this month.

The sound of warplanes was heard late on Sunday, in what appeared to be an ongoing military offensive on Hajar al-Aswad area.

The recapture of Eastern Ghouta alone was considered to be the major victory as that area was an active battle zone that posed a major threat to Damascus with daily mortar attacks on the city and the frequent infiltration attempts of the rebels that had all been thwarted by the army.