Military drills a show of force to Taiwan 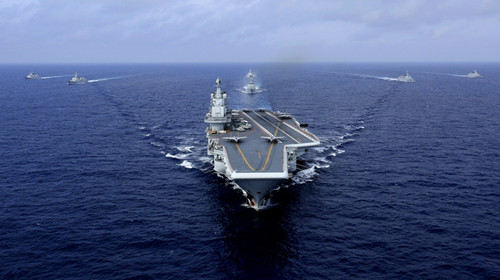 Ma Xiaoguang, spokesman for the State Council Taiwan Affairs Office, spoke in response to a question during a news conference about whether "military force for reunification" should be employed.

"The recent live-fire drills carried out by the People's Liberation Army have sent an explicit and clear message－we aim to pursue peaceful reunification with sincerity and great efforts, but we have the resolve, the confidence and the ability to defeat secessionist attempts in any form, to safeguard national sovereignty and territorial integrity," Ma said.

Ma said the drills targeted a "Taiwan independence" force, and the government aims for a peaceful and steady cross-Straits relationship and to protect the common interests of people on both sides of the Straits.

"It (the live-fire drill) is a warning to the United States, to Tsai Ing-wen and Lai Chingte," said Wang Hailiang, a researcher of Taiwan studies at the Shanghai Academy of Social Sciences.

Tsai is the island's "president" and Lai is the "premier".

"The message is clear. The statement made by the Taiwan affairs office is very sharp and it has sent a strong and clear signal. ... Further military activities can be carried out around Taiwan if the tension escalates," he said.

A series of military and political events between the U.S. and the island－such as whether U.S. Marine Corps units protect the new site of the American Institute in Taiwan－will take place in May and June, Wang said.

"If the U.S. and Taiwan have recognized the signal from the mainland's military drill, they should keep a low profile to avoid incurring Beijing's anger," he said.

Spokesman Ma Xiaoguang said on Wednesday, "China has always objected if countries with a diplomatic relationship with China establish any form of official or military connection with Taiwan," commenting on remarks that U.S. Marines may guard the AIT.