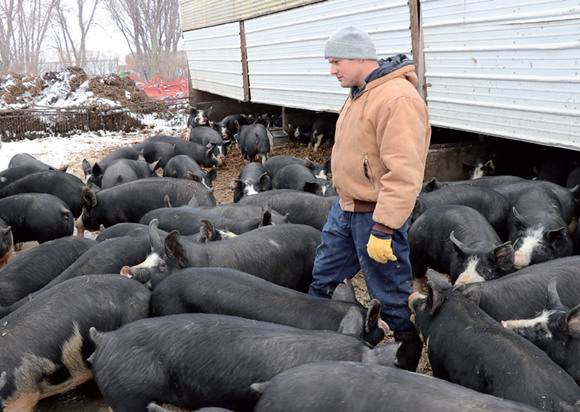 For the past two years, John Zhong has been bringing premium American Berkshire pork to tables in China.

Now, he wishes that the leaders of the U.S. and China can somehow come to the table and negotiate a deal to end the tariff threats being thrown both ways.

Zhong left China to study at Iowa State University in 2007 and fell in love with the people and lifestyle of the American heartland.

In 2015 he and his partner Rex Kuo founded Heartland Brothers -- so named because they felt like brothers united in their common love of the American Midwest values of honesty, hard work, trustworthiness and pride.

They wanted to bring a piece of the American Midwest to China by exporting Berkshire pork there.

A hybrid of Chinese and Siamese pigs produced by the British in the 1700s, Berkshire pork is prized for its juiciness, flavor and tenderness.

Zhong's fledgling company could get its wings clipped by the ongoing trade conflict between China and U.S.. In response to President Trump's tariff on Chinese steel and aluminum, China slapped a 25 percent tariff on pork at the beginning of April.

American pork exported to China already has a 12 percent tariff to begin with. An additional 25 percent duty will without a doubt take away all of Heartland Brothers' profit and more.

"The more we sell, the more money we will lose. We are becoming the collateral damage in all of this. That's so not fair," said Zhong.

Zhong and Kuo are not considering quitting just yet. "We do it because we love it, and we are proud of the heartland lifestyle," said Zhong.

One of the three suppliers for Heartland Brothers is the Tofteland family farm in Beaver Creek, Minnesota, located a few miles from the Iowa border and run by Marvin Tofteland and his son David.

They grow soybeans, corn and Berkshire hogs on 600 acres. Some of their soybeans are exported to China.

"We raise about 6,000 to 7,000 Berkshire hogs a year and have done this for about 20 years now," Marvin Tofteland said. He began selling hogs to Heartland Brothers two years ago.

"The numbers have been increasing with time. The popularity [of Berkshire pork] must be growing in China, people are acquiring more of a taste for the old-scout pork," said Tofteland. Last year about half of his hogs ended up on tables in China.

While high demand keeps the price of Berkshire hogs steady, with the extra tariff,"we won't be able to get the growth we want in China. We also would like to see John succeed," said Tofetland.

For non-specialty hog producers, the economic impact is more apparent.

"Since the tariff on Chinese steel and aluminum was announced, the price of hogs has dropped by about $20 a head. The situation definitely created an atmosphere to push the price low," said Brain Duncan, a hog farmer in Polo, Illinois.

Duncan's family farm markets about 70,000 head a year. The price drop, if it does not recover, will translate to a loss of $1.4 million for him.

Like Tofetland, Duncan hopes that both nations sit down to discuss how to divide the economic pie more evenly instead of imposing tariffs on each other.

"It's frustrating that there is a process in place through WTO to address trade concerns, but a disruptive path was chosen. Producers in the US and consumers in China get the short end. We hope both sides get this negotiated out and move on," Duncan told China Daily.

David Anderson, a professor and livestock economist at Texas A&M, said that with China being a major export market for U.S. pork, the tariff will affect the overall meat market in the U.S..

"The meat industry is interconnected. This year the U.S. is producing a record amount of meat at roughly 140 billion pounds. If we sell less to China, that means less prices for beef too," Anderson said.

In addition, China has put beef on the list for the next round of potential tariffs. "Everybody had a lot hope that (China's beef market) would grow. I don't expect the tariff to result in noticeable changes now, but the market certainly will not grow for us in the future," said Anderson.

As an economist, Anderson favors free trade. "In a bigger picture, free trade is how the economy grows. The economic gain from free trade comes from that people do what they are good at."

The opposite of free trade, tariffs will result in a lot of losers. "It's hard to see any winners in this," said Anderson.