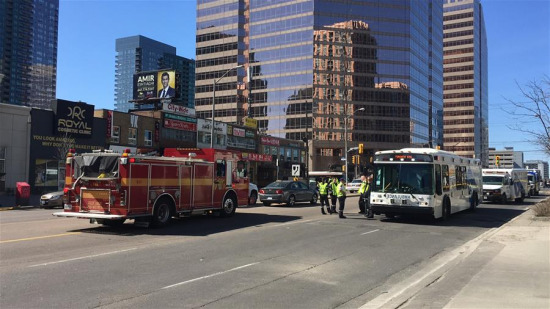 Ten people were killed and another 15 injured in north Toronto van attack on Monday, the city's police chief said.

The police chief said the suspect in the incident, Alek Minassian, was not known to police and his motives are currently still unknown.

The attack took place when a van apparently jumped onto a sidewalk from a busy intersection in Toronto and struck a crowd of pedestrians on Monday, Canadian police said.

The driver is in custody, police added.

A witness, Phil Zullo, told Canadian Press that he saw police arresting a man who had been driving a Ryder rental truck and saw people “strewn all over the road” where the incident occurred.

“It must have seen about five, six people being resuscitated by bystanders and by ambulance drivers,” Zullo said. “It was awful. Brutal.”

Police shut down the Yonge and Finch intersection following the Monday afternoon incident and Toronto’s transit agency said it has suspended service on the subway line running through the area.

The incident occurred as Cabinet ministers from the major industrial countries were gathered in Canada to discuss a range of international issues in the run-up to the G7 meeting near Quebec City in June.

Prime Minister Justin Trudeau expressed his sympathies for those involved. “Our hearts go out to everyone affected,” Trudeau said in Ottawa. “We are going to have more to learn and more to say in the coming hours.”

(With inputs from AP)