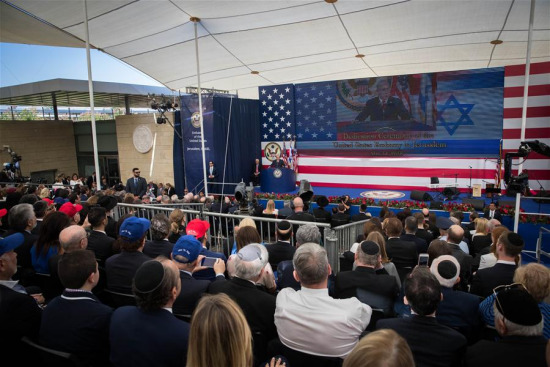 Israeli Prime Minister Benjamin Netanyahu speaks during the inauguration ceremony of the new U.S. embassy in Jerusalem, on May 14, 2018. (Xinhua/JINI)

The U.S. Embassy in Jerusalem officially opened on Monday despite international criticism. Many Israelis and Americans celebrated the event at the temporary venue of the mission in the Jerusalem neighborhood of Arnona.

In stark contrast to the festive mood in the city, dozens of Palestinians were killed on the border with Gaza in clashes with Israeli forces while protesting the opening of the embassy.

As the holy sites to three religions -- Judaism, Islam and Christianity -- Jerusalem is a highly contested city at the heart of not only the Israeli-Palestinian conflict, but also the larger Arab-Israeli conflict.

Israel captured East Jerusalem in the 1967 Mideast War. Before that, it made the western part of the city its capital. In 1980, Israel annexed the eastern part of Jerusalem, a move condemned widely by the world, which has not recognized its sovereignty over both parts of the city till today.

For Palestinians, East Jerusalem is the capital of their future state.

Throughout his presidential campaign, U.S. President Donald Trump promised to move the U.S. Embassy to Jerusalem.

It was a promise made by many candidates before, yet it was never delivered upon. But on Dec. 6 last year, Trump announced that the United States recognizes Jerusalem as the capital of Israel.

For the international community, it was a sharp departure from decades of American and international policy based on the premise that Jerusalem' s status should be determined during negotiations between Israelis and Palestinians.

The U.S. move is another phase in the elongated conflict in which facts on the ground are constantly shifting.

The European Union ambassadors to Israel did not attend the ceremony in Jerusalem on Monday to protest the decision.

"It's a very problematic move," said Professor Naomi Chazan with the Hebrew University in Jerusalem. "The message it emits is very clear ...more facts can be made on the ground without any sensitivity to Palestinian interests and rights."

Up until now, the U.S. embassy was located in Tel Aviv, Israel's financial capital. Almost all other foreign embassies are located there.

The timing of the transition from Tel Aviv to Jerusalem was moved forward to coincide with Israel's 70th Independence Day. Hence, the embassy building was not a new one. What was once the U.S. consulate in the city has been upgraded and will function as the embassy in the interim period. A new and larger venue is expected to be bought and completed in the coming years.

Several Latin American countries and a few European countries are expected to follow suit, but most embassies will stay in Tel Aviv, highlighting the isolated position Israel and the United States are in.

But the significance of the move should not be underestimated.

"Never underestimate the power of symbolism," Chazan told Xinhua. "It changes the discourse and ... inevitably affects the future of negotiations and possible outcomes. It also affects ... the nature of resistance."