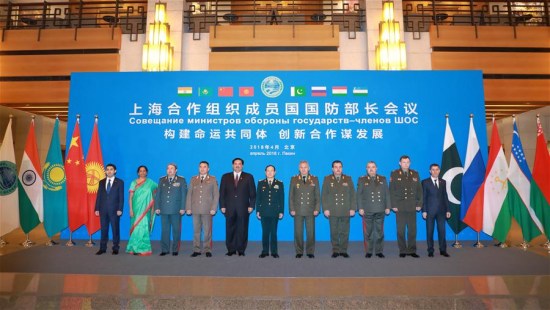 Wei made the remarks while delivering a keynote speech at the 15th meeting of the SCO defense ministers, which was held Tuesday in Beijing.

Wei called on SCO member countries to stick to the principle of treating each other as equals, helping each other and sharing weal and woe, so as to build a security pattern of joint building and shared benefits in defense and security cooperation.

"We should continue to uphold the 'Shanghai Spirit', and strengthen pragmatic cooperation in high-level exchanges, joint exercises, military culture, education and training," Wei said, adding that joint efforts should be made to fight against terrorism and safeguard regional and world peace.

Defense ministers of SCO member countries said defense ministries and militaries should further enhance cooperation and work together to deal with threats and challenges.

They also signed notes of the meeting and a joint communique.

Senior military officials from SCO member countries and representatives of SCO attended the meeting. The defense minister of Belarus was also present as a specially invited guest.