Trump says Mnuchin, USTR to travel to China for trade talks in days 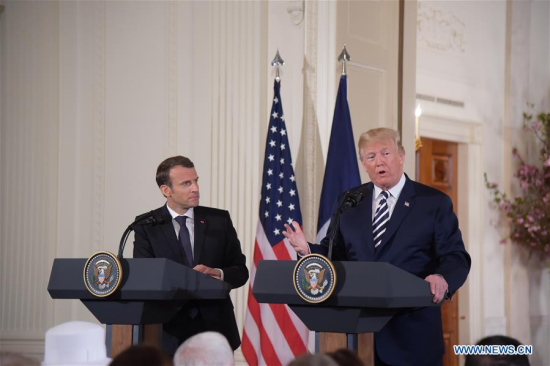 U.S. President Donald Trump (R) and French President Emmanuel Macron attend a joint press conference at the White House in Washington D.C., the United States, April 24, 2018. Macron is on a state visit to the United States from Monday to Wednesday. (Xinhua/Yang Chenglin)

"In fact, we're having Secretary Mnuchin and a couple of other folks heading over to -- Bob Lighthizer -- heading over to China," Trump said at a press conference with visiting French President Emmanuel Macron at the White House.

"They (Chinese officials) came here, as you know, last week. And we're having very substantive discussions on trade," Trump said, referring to bilateral discussions of trade on the sidelines of spring meetings of the International Monetary Fund (IMF) and the World Bank, which concluded here last week.

During the spring meetings, Christine Lagarde, managing director of the IMF, and other financial leaders around the world called on the United States and China to resolve trade tensions through dialogues and rules-based multilateral institutions.

"I believe the trade will work out ... hopefully it'll be good for everybody concerned," Trump said.

Trump's remarks came after Mnuchin said Saturday that he was considering a trip to Beijing to discuss trade issues with his Chinese counterparts.

"China has received the information about the U.S. side hoping to come to Beijing for consultations on economic and trade issues and we welcome it," Chinese Foreign Ministry spokesperson Lu Kang said on Tuesday.

"I want to stress that China-U.S. economic ties are mutually beneficial in nature and have long been delivering tangible benefits to the business communities and consumers of the two countries," Lu said.

"These problems can be solved through bilateral consultations or within a commonly recognized multilateral framework. However, they can never be solved through unilateral means," said the Chinese spokesperson.

Citing a report from the Brookings Institution, Hua said a U.S.-China trade war would result in a loss of more than 2.1 million jobs in 2,700 U.S. counties.