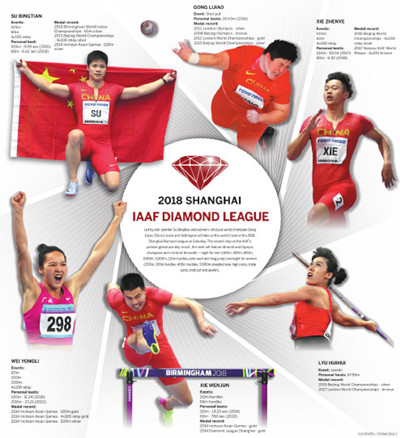 China's finest are ready to mix it with the world's best at Saturday's star-studded Diamond League Shanghai meet.

The annual extravaganza, the second stop on the IAAF's prestigious global circuit, attracts the cream of track and field, with Chinese sprint star Su Bingtian and shot-put powerhouse Gong Lijiao again proving they belong in such elite company by bagging golds at last year's event.

Su and the up-and-coming Xie Zhenye will lead China's charge in a world-class men's 100 meters field at Shanghai Stadium.

Su heads into the meet bolstered by a great start to the year when he claimed the overall 60m title on the IAAF World Indoor Tour－a victory that gave the 28-year-old belief he is still a force to be reckoned with.

"I told my wife last year I might call it quits this season, but I found I still have dreams to achieve... now I tell myself to keep training and hopefully I can compete again at the 2020 Olympics in Tokyo," said Su earlier this year.

Su is the first Asia-born sprinter to run a sub-10-second 100m, and rising star Xie has set his sights on becoming the next.

The 24-year-old dethroned Su at last September's National Games, while his confidence was further boosted by two wind-assisted sub-10s and breaking his own national 200m record by clocking 20.20.

Su and Xie, though, face stern competition in Shanghai in the form of Olympic champion Justin Gatlin.

Despite being 36, Gatlin's powers do not appear to be diminishing, as witnessed by the American's storming victory over Usain Bolt to claim 100m gold at last year's world championships in London.

Xie Wenjun will fly the flag for China in the 110m hurdles hoping to revive memories of his 2014 Shanghai victory－although a repeat feat seems unlikely considering he is up against reigning Olympic and world champion Omar McLeod of Jamaica and 2016 Olympic silver medalist Orlando Ortega of Spain.

In the men's pole vault, Xue Changrui is the pick of a Chinese trio and will look to improve on the personal-best 5.81m he cleared last year. France's world-record holder Renauld Lavillenie is the man to beat in this event.

The 29-year-old won last year's event and will not give up her crown easily.

"I am delighted to be coming back to Shanghai and I hope to defend my title," she said.

Lyu Huihui, the bronze medalist at the 2017 worlds and the meet's record holder, will compete in the women's javelin, while Asian champion Wei Yongli will go for glory in the 200m.

Close to the action

Fans will be able to roar on the home hopes in a special 'China Power' section close to the finish line in Stand No 7.

"Diamond League Shanghai provides Chinese athletes with a wonderful platform to show the world what they can do and gives Chinese sports fans the chance to watch the top-level competition year in, year out," said Yang Yibin, deputy general manager of the meet's organizer Juss Sports.

"Leveraging and highlighting Chinese elements has always been a feature of the meet. The idea of allocating designated seats as a special zone for Chinese spectators to cheer for Chinese athletes is in line with our long-term mission to consistently build enthusiasm for athletics in China."

The section also boasts the best seats in the house for watching the shot put and javelin competitions.

Tickets cost 80 yuan ($12) and come with a commemorative T-shirt and special ticket folder. Ticket holders for all sections are entitled to free subway travel in the city thanks to Diamond League Shanghai and Shanghai Metro's commitment to promoting green transportation and low-carbon living.