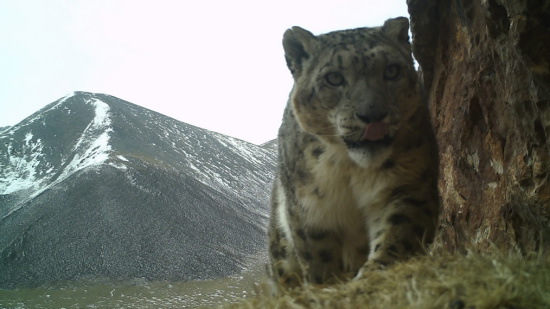 A snow leopard is captured by an infrared camera on the Amney Machen Mountain. /Plateau Nature Conservancy Photo

An environmental organization based in northwest China’s Qinghai Province used infrared cameras to capture more than 500 images of snow leopards in four months, according to data analysis released recently.

The investigation was launched by the Plateau Nature Conservancy on the Amnye Machen Mountain. In November, local herdsmen installed about 70 infrared cameras in different locations on the mountain.

“We have been working on the plateau for many years, and we found that Amnye Machen is one of the most important habitats for snow leopards, but the living status of the animal here is still unknown,” Awang Jikmed, founder of the conservancy, told CGTN. He added that it’s the first time that large-scale monitoring was carried out in this region.

Situated in the Guoluo Tibetan Prefecture of Qinghai, the Amnye Machen is considered to be one of the most sacred mountains by Tibetans. It is the largest glacier of the headwaters of the Yellow River, the second longest river in China.

“I know there’re a lot of blue sheep living around, they are the main prey for snow leopards. I also found traces of urine from the leopards,” said Sangdhan, a local Tibetan who participated in this initiative, explaining why he had put his camera under a cliff about 4,000 meters above sea level.

The snow leopard is considered to be a flagship species. It is an important indicator to the status of the plateau ecosystem. China is home to the largest amount of this rare animal, with about 60 percent of the animal’s total habitat. But in recent years, their deteriorating living environment has aroused great public concern.

Awang said several factors could be attributed to the degradation of the snow leopard’s habitats, such as construction work on the mountain. Meanwhile, the Tibetan Plateau is home to the cordyceps (or caterpillar) fungus. From April to July every year, thousands of people swarm to the plateau to “loot” the herbs, which are deemed valuable to people’s health. This has further burdened the fragile environment.

In September 2017, the International Union for Conservation of Nature changed the animal’s status from “Endangered” to ‘Vulnerable’. However, without solid proof on the improving situation for the snow leopard, environmentalists and experts still remain concerned.

“We are going to use the data for some particular reasons. First, we will analyze all the image data to see what’s the situation and status is of the snow leopards here on the Amnye Machen region and deliver these results to relevant government agencies,” said Awang.

Such surveys have been carried out in different areas of Qinghai since 2017. In March, the Shanshui Conservation Center said it managed to capture images of snow leopards about 300 times in three months in the province's Lancang River source area.

Awang says such investigations by environmental organizations are just the first step, and their data doesn’t necessarily mean the ecological environment is getting better.

“We need multiple government departments to participate in the conservation,” he said.

He also believes more and more local herdsmen will actively participate in the endeavor, as the concept of protecting their traditional culture and their holy homeland is deeply rooted in their culture.