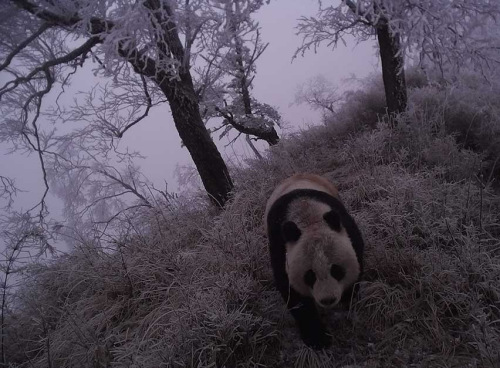 This image of a wild giant panda at night was taken by an infrared camera in the Baishuijiang National Nature Reserve in Gansu province in January. (Photo provided to China Daily)

Four wild giant panda cubs were spotted at different times strolling around with their mothers in a nature reserve in northwestern China in recent months, authorities said on Sunday.

Infrared cameras in the Baishuijiang National Nature Reserve in Gansu province caught four panda cubs trailing behind their mothers and learning survival skills, such as foraging, in the first quarter of this year.

It was the latest identification of new panda cubs in the area, which has the largest population of wild giant pandas among China's 67 nature reserves.

The fourth national survey on giant pandas, released in 2015, said there were 110 wild pandas living in the Baishuijiang area. A total of 1,864 lived in China.

The Baishuijiang nature reserve has employed infrared cameras since 2012 to monitor giant pandas, but this is the first time that four pairs of pandas have been spotted.

"In the past, we found one pair every quarter at most," said He Liwen, director of the Baishuijiang reserve. The cubs' body sizes suggested that two of them were a year and a half old, while the other two were almost 2 years old.

"The four pairs were caught in different places remote from each other. It's very easy to see the differences," he said. "So we can be sure of the number."

The reserve director attributed the good news to the government's emphasis on protecting the ecosystem and local residents' efforts to preserve the natural panda habitat over many years.

"It's a process of consistent, incremental progress," He said.