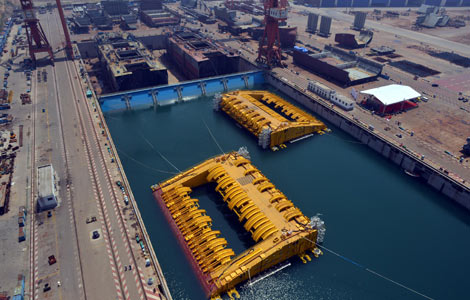 Wuchang Shipbuilding Industry Co., Ltd. delivered four sets of buoys and 16 sets of foundations to Petrobras as part of the Sapinhoa-Lula NE BSR Buoys & Foundations Project, which will be installed in an offshore oilfield in Brazil to work for a period of 27 years。

The equipment is able to fit in deeper and more complicated marine environment and has extensively enlarged the scope of offshore oil exploitation, said Victor Bomfim, senior vice president of the project contractor Subsea 7 S.A。