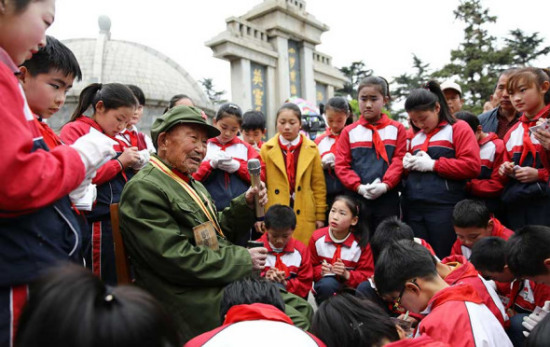 Ma Ruying, a veteran who fought in the War of Resistance Against Japanese Aggression (1931-45), shares his memories about the war with students at a cemetery in Lianyungang, Jiangsu province, on April 5, Tomb Sweeping Day. (Photo: Si Wei/For China Daily)

A law to protect the reputation and honor of heroes and martyrs went into effect Tuesday in a move to promote patriotism and socialist core values in China.

The country and the people should forever respect and remember the heroes and martyrs for their sacrifice and contribution to the Chinese nation and the people, according to the law.

The law was passed unanimously after a second reading at the bimonthly session of the Standing Committee of the National People's Congress Friday.

"All members of society should honor them, learn from them and guard their reputation," the law says.

The law bans activities that defame heroes and martyrs or distort and diminish their deeds. Those who violate their rights of name, portrait, reputation, and honor will be punished.

"Defaming national heroes is in fact undermining the national spirit embodied by these heroes," said Xiong Wenzhao, a law professor at Minzu University of China and expert with the China Law Society.

The state has the responsibility to protect the rights and interests of these heroes and the public interest behind them, he said.

The law also requires internet operators to speedily handle online information that infringes on heroes and martyrs, and harmful information originating from overseas should be intercepted using technology or other necessary means.

TO PASS ON THE SPIRIT

The new law includes content on the protection of memorials of heroes and martyrs, and publicity and education about them and their deeds.

Memorials for heroes and martyrs should be open to the public for free, and activities to commemorate and educate should be held for the public, the law reads.

School curriculums should include content on the heroes and martyrs to strengthen patriotic education among students, according to the law.

"It is a whole new level of patriotic education with the help of the law. The spirit of those heroes and martyrs has to be passed on generation after generation," said Zhang Jianjun, curator of the Memorial Hall of the Victims in Nanjing Massacre by Japanese Invaders.

TO REMEMBER THE PAST

It also outlaws acts that glorify invasions, with offenders facing administrative or criminal punishments according to the severity of their actions.

Yue Zhongming, an official with the Commission for Legislative Affairs of the NPC Standing Committee, said at a press conference on Friday that it is correct to outlaw acts that praise invasions, noting that a handful of young people recently dressed in Japanese WWII army uniforms and spread the photos online to glorify the war.

In another incident earlier this year, two young men were held by police after posing in front of ruins in Nanjing, dressed in the uniforms of Japanese invaders and holding "army weapons."

Nanjing is the site of the Nanjing Massacre. Japanese troops captured the city on Dec. 13, 1937. Over six weeks, they killed 300,000 Chinese civilians and unarmed soldiers.

"The new law has sent a loud warning against wrong behavior," said Zhang, the curator.