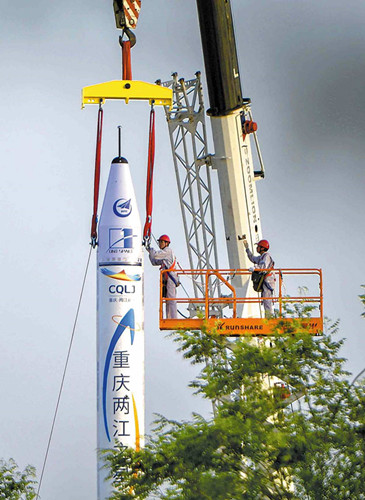 China's first carrier rocket designed and built by a private enterprise was launched on Thursday morning from a test base in northwestern China.

The OS-X suborbital rocket, developed and made by OneSpace Technology in Beijing, blasted off at 7:33 a.m. It flew 306 seconds and traveled 273 kilometers through the atmosphere before falling back to the ground, the company said.

The mission verified the rocket’s overall design and reliability, the company said. It fulfilled a long, controllable flight, carrying a payload for Shenyang Aircraft Design and Research Institute under Aviation Industry Corp of China, obtaining a great deal of data for the rocket designers and the institute.

The company said the craft adopted several instruments that were new to Chinese rockets, such as the drag-mitigating pole and built-in communications devices.

Inspired by Elon Musk and his legendary company SpaceX, at least four private Chinese companies — OneSpace, LandSpace, LinkSpace and i-Space — have announced plans to develop, make and launch carrier rockets. Through Thursday’s mission, OneSpace has become the first to realize the goal.

Research and development of the OS-X took only one year. OneSpace said its designers and engineers are able to develop and produce almost all key parts of a rocket, noting that many of them have worked for State-owned space contractors.

The rocket will mainly be used to conduct proof-of-concept flights for new-concept aircraft or spacecraft developed by OneSpace’s clients to verify their aerodynamic designs. Many domestic institutes have designed new concepts of aircraft and spacecraft, and these futuristic craft need to conduct test flights atop a rocket to examine whether their design will work.

Established in 2015, a year now widely deemed as the opening chapter of China’s commercial space industry, OneSpace has become a rising star in the country’s space arena, which has long been dominated by State-owned giants.

Its rapid growth has been possible thanks to the government’s efforts to foster the commercial space sector and encourage participation from private enterprises.

The company also has taken advantage of the government’s measures to enhance the integrated development between the civilian and defense sectors, Shu Chang, founder and chief executive of OneSpace, said at a news conference on Thursday after the launch.

Shu said his company is developing the OS-M1, a larger rocket, to send small satellites to Sun-synchronous orbits or low-Earth orbits. He said the OS-M1’s debut flight will take place near the end of 2018.

Ma Chao, OneSpace’s president, said the OS-X is scheduled to make another three launches this year.