Trump meets with Chinese Vice Premier Liu He in Washington 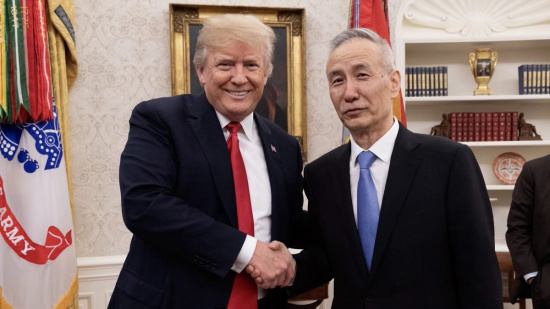 Liu arrived in Washington, DC, on Tuesday afternoon for economic and trade consultations with the U.S. side at the invitation of the U.S. government.

Liu said China is willing to work together with the U.S. to address the trade and economic issues which concern both countries on the basis of equality and mutual benefit, making sure that the bilateral trade and economic cooperation continues to be the propeller for China-U.S. relations.

He said that China-U.S. relations have made major positive progress with the joint leadership of the two heads of state.

He added that the development of China-U.S. relations is at an important stage. Both sides should work together with mutual respect to promote the healthy and stable development of bilateral ties.

Trump said the two sides should strengthen investment and cooperation in energy and manufacturing, expand trade in agricultural products and market access, beef up cooperation in IPR protection and bring more benefits to the people of both countries.

He also said that he highly valued the good working relationship and personal friendship with President Xi Jinping, and he would like to maintain close communication with President Xi and jointly advance the sustained development of U.S.-China relations.