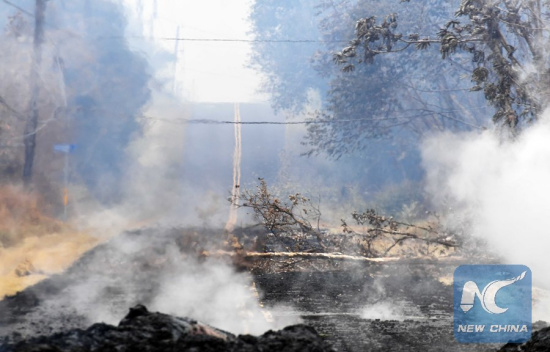 Volcanic debris are seen on a road in Leilani Estate, Hawaii, the United States, May 9, 2018. According to reports of the Hawaii State government, eruptions of the KilaueaVolcano had forced the evacuation of thousands of people. (Xinhua/Tao Xiyi)

Hawaiian Volcano Observatory (HVO) said on Thursday that the Kilauea volcano on the Big Island erupted from its summit shortly after 4 a.m. local time.

The explosion from the Overlook vent within Halemaumau crater at Kilauea Volcano's summit produced a volcanic cloud that reached as high as 30,000 feet (about 9,100 meters) above sea level and drifted northeast, according to HVO.

The U.S. Geological Survey posted webcam footage of an ash plume billowing from the Kilauea's summit, and a plume of ash from an observation tower.

"Continued emissions from the crater are reaching as high as 12,000 ft," HVO tweeted. "At any time, activity may again become more explosive, increasing the intensity of ash production and producing ballistic projectiles near the vent."

Shortly after the eruption, the Hawaii County Civil Defense Agency urged residents to shelter in place as the "resulting ash plume will cover the surrounding area."

"The wind will carry the plume toward the southeast," the agency warned on social media. "You should shelter in place if you are in the path of the ash plume. Driving conditions may be dangerous so if you are driving pull off the road and wait until visibility improves.

On Tuesday, the U.S. Geological Survey issued a red alert, warning that eruption is imminent or underway with or suspected with significant emission of volcanic ash into the atmosphere. Staffs from HVO and Hawaii Volcanoes National Park had already evacuated the area.

The area southeast of Kilauea volcano's summit is in a rural, remote part of Hawaii Island on its eastern edge, far from any major resort areas. The closest resorts, in Kona and the Kohala Coast, are more than 100 miles away on the west side of the island.