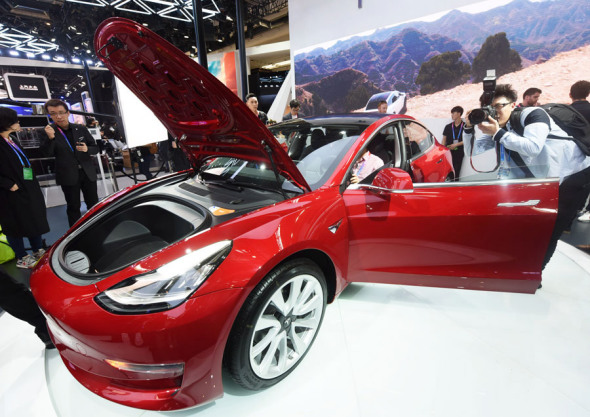 U.S. electric carmaker Tesla Inc has registered a wholly owned subsidiary in Shanghai, marking another step toward setting up its first ever overseas carmaking plant in China.

The subsidiary, established on May 10, has registered capital of 100 million yuan ($15.73 million) and its sole shareholder is Tesla Motors HK Ltd, according to the National Enterprise Credit Information Publicity System.

The new company will engage in research and development, and technology transfer in electric cars, automobile parts, batteries and energy storage equipment. It will also conduct wholesale business and import and export activities for such products, among other related functions.

Tesla did not give any comment on the move, but John Zeng, managing director of LMC Automotive Shanghai, said the R&D facility will be one of Tesla's first steps toward producing cars in China, which has been the world's largest new energy car market since 2015.

"Tesla has to hurry up, otherwise it may lose its first-mover advantage, as many carmakers, including BMW and Mercedes-Benz, are expected to offer their localized electric cars in China around 2020," Zeng said.

Domestic electric startups, including Nio and WM Motor, have released their first models, with more than a dozen set to follow suit within the next two years.

Yale Zhang, managing director of consultancy firm Automotive Foresight, said: "Soon the competition will become fiercer, so the sooner Tesla starts localization, the better it will be for its performance in China."

Local industry policies are doing Tesla a favor. The Chinese government announced in April that it will remove the current 50 percent cap on foreign equity this year for companies that produce new energy vehicles in the nation.

Tesla sold 17,030 cars in China last year, accounting for 16.5 percent of its global sales, according to the China Auto-mobile Dealers Association.

In an earnings call with analysts on May 2, Tesla CEO Elon Musk said the company was close to announcing its Shanghai factory plans, according to the Wall Street Journal.

Late last year, Tesla made public its plan to build a plant in China by the end of the decade, saying that the facility will make cars for China and other parts of Asia.

The carmaker said it will manufacture the smaller and cheaper Model 3 sedan and the upcoming Model Y crossover in China, but will not produce the more expensive Model S sedan or Model X SUV.

The company is also set to produce batteries in China with its partner Panasonic Corp, according to Reuters.

"Tesla could in the future launch fully fledged production in China, and we could produce jointly," said Panasonic CEO Kazuhiro Tsuga last week.