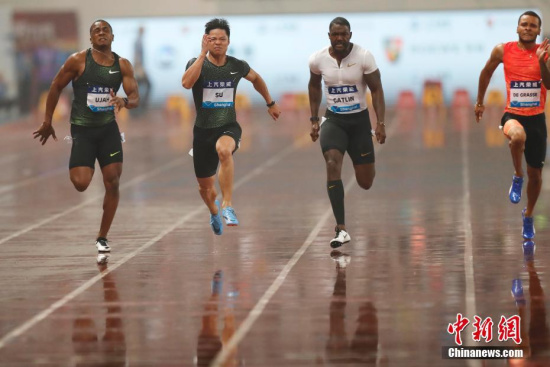 Chinese Spriter Su Bingtian said on Saturday that his performance in 100m race at Shanghai Diamond League was beyond his expectation after he took silver in 10.05 seconds.

The 29-year-old failed to defend his title in the event, only 0.01s behind Prescod Reece of Britain. Another home star sprinter Xie Zhenye finished third with 10.17.

"It is beyond my expectation, I felt a little nervous when it rained, I felt good in the whole race, just a little tough in the last 30 meters," Su said, adding he was satisfied with the result.

After an Asian-record-breaking feat in 60 meters in the indoor season of 2018, China top star sprinter was expected to renew his own 100m national record of 9.99 seconds.

"It is just a start, I hope I can be better and better in the future. I have told my coach that I wanted to showcase my best form in Eugene, even just a little progress," he added.

Su admitted the strong squad which featured Justin Gatlin would help him to run better. "They are the top athletes, it is the best opportunity to learn and gather experience," he said.