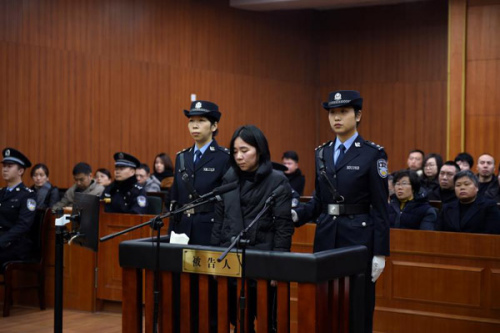 The nanny responsible for killing four members of a family in an arson appeared in court in eastern China on Thursday to appeal her death sentence.

Mo Huanjing, nanny of the family of Lin Shengbin, pleaded guilty to starting the fire. But she said during the appeal at Zhejiang High People's Court that "the penalty in the original ruling was extremely heavy".

"The tragedy wasn't the result I wanted to see," she added.

She said the efforts of firefighters were flawed. And she confessed to her offense during the initial interrogation, which could be regarded as a reason to earn a more lenient sentence.

Wu Pengbin, her lawyer, told China Daily that some firefighters and employees of the property management department of Lin's apartment attended the hearing as witnesses at his urging.

"I wanted them to show what they were doing at the time to the court, as I, with my client, thought their rescue attempt lacked urgency and there was also something wrong with the water pressure in the apartment," he said.

Mo, 35, expressed deep remorse for her actions and apologized to Lin's family at the end of the hearing. She requested a lenient sentence in court, but added that she would accept the result if the original verdict is upheld.

The court said the judgment would be announced at a later date.

Mo was sentenced to death on Feb 9 at the Hangzhou Intermediate People's Court after intentionally setting the fire in Lin's apartment in the city on June 22, 2017, killing Lin's wife Zhu Xiaochen and their three children, ages 6, 9 and 11.

The original verdict ruled that the defendant, who was burdened with heavy gambling debts, sought nanny positions in 2015 to pay her debtors. In September 2016, she obtained a live-in nanny job at Lin's home in Hangzhou.

She stole gold jewelry and watches from the family and then pawned them for over 180,000 yuan between March and June last year, it said.

On June 22, she decided to win Zhu's gratitude by lighting a fire and then extinguishing it to get more money, after having lost 60,000 yuan from bad bets. But the fire spread quickly and she escaped from the home. Zhu and her three children died of carbon monoxide poisoning, it said.

In a statement posted by the high court on Thursday, Mo said she tried to extinguish the fire at the time, and had prepared buckets of water in advance. She said she knocked on windows of the children's rooms to wake them up and called police and security guards for help. But she added that she failed to extinguish the blaze amid a bout of anxiety, it added.