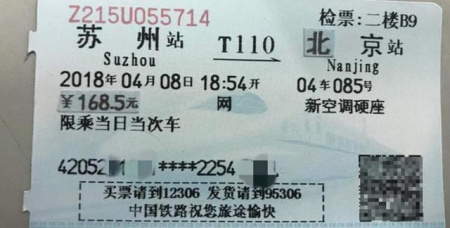 A man from eastern China was banned from buying train tickets for six months after he confessed to forging a ticket recently.

The 37-year-old, surnamed Hu, was intercepted at Suzhou railway station in Jiangsu Province last week when a guard detected alterations to his ticket.

After he was taken to a police station, Hu confessed, police said.

He told officers that he was planning to go to Beijing from Suzhou, but he bought a ticket from Suzhou to Nanjing on the same line at a cost of 32.5 yuan (about 5.2 US dollars).

He said he followed the online instructions, printed Chinese characters and numbers on blue paper and glued them on the ticket. By doing so, the ticket shows the destination as Beijing and the price changed into 168.5 yuan (about 26.7 US dollars).

He was detained for five days and his name will be recorded into his social credit system, which means he cannot buy any train tickets in the next six months.

First announced in 2014, the social credit system is an attempt to promote honesty and deter cheating, with honest people and enterprises honored while poor credit performers like defaulting debtors and taxpayers blacklisted.

According to Zhang Yong, deputy head of the National Development and Reform Commission, China’s top economic planner, more than nine million Chinese have been denied air transportation and over three million people had been prohibited from buying soft sleeper train and bullet train tickets due to their poor credit performance up to March.

The mechanism is expected to be fully implemented by 2020.