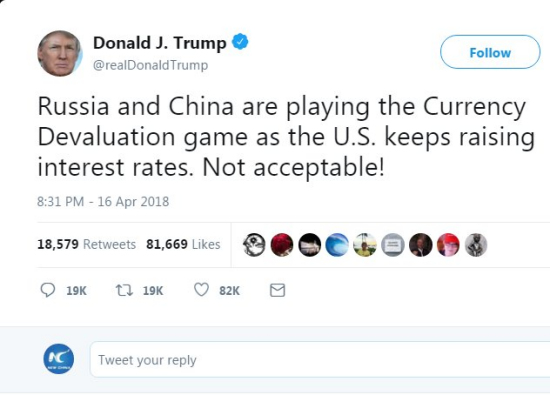 "Russia and China are playing the Currency Devaluation game as the U.S. keeps raising interest rates. Not acceptable," Trump tweeted on Monday, which is in odds with the latest report with the U.S. Treasury Department, and inaccurately describes the economic situation.

"No trading partner was found to have met the legislative standards for currency manipulation during the current reporting period," the Department said in its Semi-Annual Report to Congress on International Economic and Exchange Rate Policies.

According to the report, "the Monitoring List comprises China, Japan, (South) Korea, Germany, Switzerland, and India."

"China is the most successful example of external rebalancing in the post-crisis period among the major surplus economies," said the report.

The appreciation of the Chinese currency, yuan, in 2017, helped reduce China's trade surplus with the United States, according to the report.

In addition, the Treasury Department said it places "significant importance" on China adhering to its G20 commitments to refraining from engaging in competitive devaluation and not to target China's exchange rate for competitive purposes.

As China pushed forward market-oriented reforms on its foreign exchange rate mechanism, the Chinese currency, Renminbi, has been broadly in line with fundamentals in recent years, many economists and institutions pointed out.