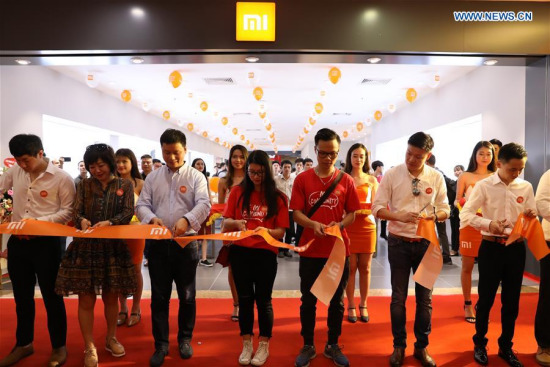 The first Mi Store of Chinese technology giant Xiaomi in Vietnam's Hanoi capital did not officially opened until 10 a.m on Saturday, but hundreds of Vietnamese people flocked here and made two parallel long queues as early as from 3 a.m. local time.

"I queued up here from 3 a.m. this morning. I've already used a Redmi Note 3 Pro and a 10,000-mAh Mi power bank for two years. They're still running very well, so I won't buy the latest model, Redmi Note 5 Plus, but I want to buy a portable Wi-Fi device," Dao Duy Hoa, a fourth-year-student at the Hanoi Academy of Theater and Cinema, told Xinhua on Saturday when he topped one of the two long queues.

Wearing a black T-shirt, the young man, who will graduate next year to become a cameraman, said in the near future, he will replace his Redmi Note 3 Pro with the latest Redmi model because Xiaomi smartphones have high-end configurations but reasonable prices.

"Redmi models look very stylish, and their good specifications serve me well in terms of both work and entertainment," he said.

Queuing up later than Hoa, but Nguyen Khanh Tung, a fourth-year student at the Hanoi University of Industry, and his girlfriend still managed topped the other long queue.

"I live in Hanoi, but my girlfriend lives in Bac Ninh (the nearby northern province), so I picked her up yesterday and came here early this morning, Tung told Xinhua while standing behind his girlfriend.

Wearing red T-shirts, the duo said they were eager for the grand opening of the first Mi Store in Hanoi to buy some latest products of Xiaomi.

"Over one year ago, we bought two Mi power banks and two Mi wristband bracelets. Today, we want to buy two fashionable backpacks or suitcases for our journeys. Now and forever," said Tung, smiling.

Another girl named Bui Thu Huong, a marketing staff of Vietnamese telecommunications and software firm DTH, talked about tech trends in the world and Vietnam, including those relating to Xiaomi products.

"I've used various kinds of Xiaomi items, ranging from smartphones to the smart wristbands with OLED displays which can monitor my heart beats, sleeping patterns, steps and calories burnt, and vibrate to remind me of calls, messages and notifications from Facebook. This morning, I want to buy a backpack and a teddy bear, no, a bunny from this Mi Store," Huong said.

Not only Vietnamese youths but also many middle-aged and elderly people are tech-savvy.

"I'm old and weak, so this robot vacuum cleaner may be a great help," Nguyen Thi Thanh, a resident of Times City where Xiaomi's latest Mi Store is located, said, while gently rubbing a white round disk-like product named Robot Vacuum.

Phong, a third-year student at the Hanoi-based Military Technical Academy, said there are now some 113,000 Mi fans across Vietnam.

"We discuss both online and offline everything relating to Xiaomi, mainly sharing ways of using its products for better studies and work as well as for better health," Phong said.

Xiaomi, which first officially entered Vietnam over a year ago, has already rolled out seven authorized Mi stores in the country, including five in Ho Chi Minh City, one in central Thanh Hoa province, and one in Hanoi.

Jack Yung, Xiaomi Vietnam country manager said, "Ever since our first store opening in Vietnam, people have been asking us 'When will you open in Hanoi?' And it's thrilling to be here today delivering on our promise to Mi fans in the capital."

"We are a company devoted to bringing innovation to everyone. It's about making people across Vietnam to have an easy access to our smartphones and eco-products," the manager said.