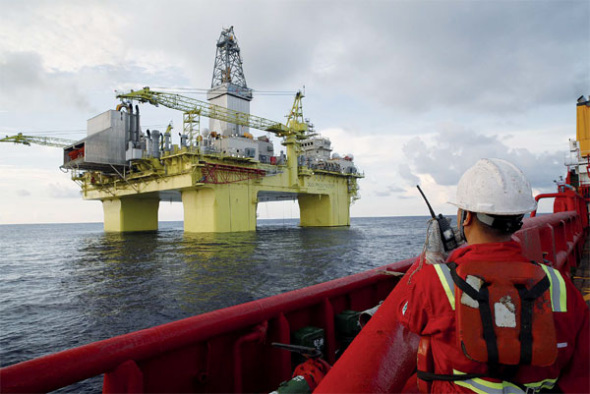 A worker checks one of CNOOC's deep-water drilling platforms in the South China Sea. (Photo/Xinhua)

China National Offshore Oil Corporation and Shell Nanhai BV announced the start up of their second ethylene cracker at their Nanhai petrochemicals complex in Daya Bay, a major petrochemical production base.

Meanwhile several derivative units have also started and the remaining units will begin production progressively over the next few weeks. These units were constructed by CNOOC and are owned and operated by CSPC, the existing CNOOC and Shell Petrochemical Co joint venture.

"The start up of the new ethylene cracker and derivatives units is a significant milestone for Shell," said Graham van't Hoff, executive vice-president for Royal Dutch Shell PLC's chemicals business.

"I would like to thank our partner CNOOC for its excellent project delivery. As the largest single-site ethylene complex in China, CSPC is key to Shell Chemicals' growth ambitions," he said.

"It has been recognized by the government as a role model for major industrial projects in China. And this shows what we can achieve through effective international partnerships," He said.

"We can now produce more and better chemical products for the growing domestic market," he said.

The new ethylene cracker increases ethylene capacity at the complex by about 1.2 million metric tons per year, more than doubling the capacity of the complex, and benefits from a deep integration with adjacent CNOOC refineries, He said.

The new facility will also include a styrene monomer and propylene oxide plant, which will be the largest in China when it begins operations.

It is the first time that Shell's industry-leading OMEGA and advanced polyols technologies have been applied in China. With a strong track record of reliable and safe operations, the petrochemicals complex produces olefins and derivative products that are used in a wide range of industrial and consumer products, including household appliances, cars, furniture and computers.

The complex benefits from deep integration with the adjacent CNOOC refineries. The expansion enables further monetization of advantaged feedstock from nearby CNOOC refineries, responding to the anticipated strong Chinese domestic demand in the long term.

Shell has onshore and offshore gas and oil development projects in partnership with PetroChina and CNOOC, both inside and outside China, which help to fuel the country's fast-growing economy. Shell's downstream business in China now consists of 11 joint ventures and eight wholly-owned companies.

Founded in 1982, CNOOC is now the largest offshore oil and gas producer in China and its business covers more than 40 countries and regions worldwide.