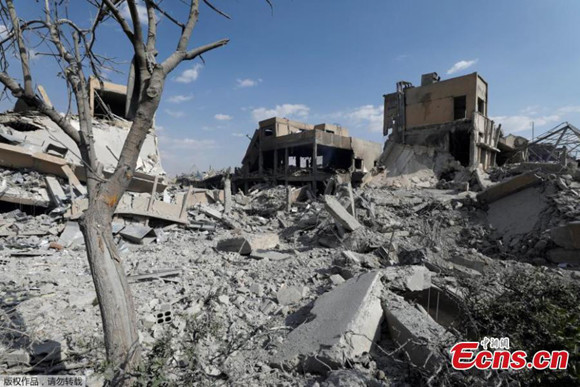 In Damascus and Baghdad, people protest against U.S.-led airstrikes

The strikes, launched by the United States along with its allies Britain and France before daybreak on Saturday, followed reports of suspected chemical weapons use in Douma district on the outskirts of Syrian capital Damascus on April 7.

The Syrian government had strongly denied the allegation, calling for the Organization for the Prohibition of Chemical Weapons to send a fact-finding mission for investigations. However, the three nations carried out the strike on the day the mission just arrived in Damascus.

The United Nations Security Council on the same day held an emergency meeting over the missile attacks at Russia's request, but failed to approve a resolution condemning the bombardment.

On Sunday, Russian President Vladimir Putin and his Iranian counterpart Hassan Rouhani condemned the airstrikes over phone, agreeing that the "illegal action seriously damages the prospects for a political settlement" in the war-torn country, according to a Kremlin statement.

"Putin in particular stressed that if such actions, carried out in violation of the UN Charter, continue, it will inevitably lead to chaos in international relations," the statement said.

On Monday, hundreds gathered in a square in Syria's capital, Damascus, rallying in support of their armed forces, which they said succeeded in confronting the unprecedented joint airstrikes by the West over the weekend.

State TV broadcast the rally live from the central Omayyad Square. Protesters waved Syrian flags at the demonstration, dubbed a "salute to the achievements of the Arab Syrian Army", set off fireworks and unleashed celebratory gunfire.

On Sunday in Baghdad, thousands of Iraqis and civil rights activists rallied in downtown to protest against the U.S.-led attacks on Syria.

The demonstrators rallied in Tahrir Square in the afternoon, raising Iraqi and Syrian flags in solidarity with the people of Syria and chanting slogans condemning the bombing against Syria.

Jabra al-Taei, a female civilian activist, said: "Syria is a brother and has been exposed to an aggression by the United States, Britain and France. But unfortunately they forgot that such bombing could threat the lives of civilians."

Meanwhile, French President Emmanuel Macron said he was ready to talk to all, including Russia and Iran, to pave the way for inclusive political transition in the war-torn Syria.

"I say it from the beginning, to build lasting peace, one needs to dialogue with Iran, Russia and Turkey. France's policy is to talk with everyone. It's the condition to have peace," Macron told French news outlets on Sunday.

Macron said on Sunday that he had convinced Trump, who previously said he wanted to take U.S. forces out of Syria, to stay for "the long term".

But the White House pushed back against Macron's comments about Trump's intentions for U.S. forces.

"The U.S. mission has not changed - the president has been clear that he wants U.S. forces to come home as quickly as possible," White House spokeswoman Sarah Sanders said.

Also on Monday, British Prime Minister Theresa May was scheduled to face angry lawmakers for authorizing the strikes without a vote in Parliament.

Her office said she planned to tell critics of the government that the strikes were "in Britain's national interest" and were carried out to stop further suffering from chemical weapons attacks.