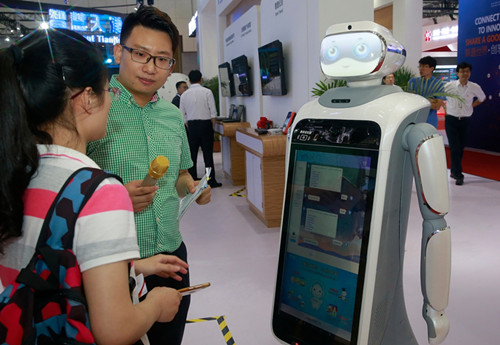 An intelligent robot made by China Telecommunications Corp is on show at the Second World Intelligence Congress in Tianjin. (Photo by Jia Chenglong/For China Daily)

China will ramp up resources to develop core technologies such as artificial intelligence chips and sensors, as part of its broader push to integrate AI into the manufacturing sector, the nation's top industry regulator said on Thursday.

Zhang Feng, chief engineer of the Ministry of Industry and Information Technology, said China is now the world's second-largest owner of invention patents and international scientific papers, with significant progress made in voice and image recognition, as well as natural language understanding.

"In future, more efforts will be made to pursue breakthroughs in crucial technologies that are key to the entire industry and can serve as a strong motivation. We will focus on AI chips, sensors and core algorithms," Zhang said at a conference in Beijing to celebrate the World Telecommunications Day, which fell on Thursday.

According to him, the country will also strengthen research and development on cutting-edge technology such as cognitive computing and machine learning.

The ministry unveiled a three-year plan in December to boost the application of AI in the automobile, robotics, healthcare and other sectors, in its latest push to upgrade the country's real economy.

On top of aiming to build a globally competitive smart internet-connected car industry by 2020, the country also wants to accelerate the use of AI-enabled systems to assist doctors in medical cases, and services robots that can help senior citizens and children.

But to achieve these goals, more efforts are needed to cultivate homegrown companies that specialize in high-end sensors and AI chips. Platforms that integrate software and hardware are also needed to power self-driving vehicles and other applications, said Wang Weiming, deputy director of the science and technology department of the ministry.

Last year, China outlined its plan to build a 150 billion yuan ($23.6 billion) AI core industry by 2020, which is supposed to stimulate as much as 1 trillion yuan in related business.

Li Zhengmao, vice general manager of China Mobile, the nation's largest mobile telecom carrier by subscribers, said the company is building a large-scale internet of things network which will build a sound foundation for the era of AI.