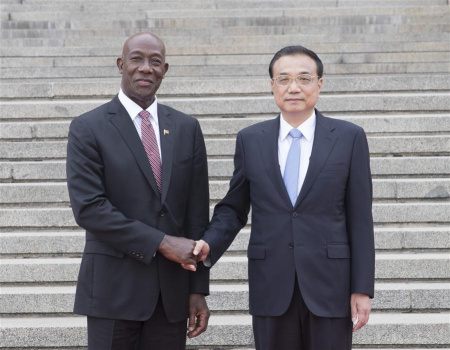 Chinese Premier Li Keqiang (R) holds a welcome ceremony for Prime Minister Keith Rowley of Trinidad and Tobago before their talks in Beijing, capital of China, May 14, 2018. (Xinhua/Wang Ye)

Chinese Premier Li Keqiang held talks with Prime Minister Keith Rowley of Trinidad and Tobago on Monday, and they agreed to expand cooperation in infrastructure construction, finance and other areas.

Li said Trinidad and Tobago was among the first Caribbean countries to establish diplomatic ties with China.

"China is willing to link the Belt and Road Initiative with the development strategies of Trinidad and Tobago to enhance cooperation in areas including infrastructure construction, energy, finance and agriculture," Li said.

He added that China encouraged its companies to invest in Trinidad and Tobago in accordance with market principles and business rules.

Next year marks the 45th anniversary of the establishment of diplomatic ties between the two countries, and Li called for more communication in education, culture, sports and tourism, as well as visa facilitation to promote people-to-people exchanges.

"China, Caribbean and Latin American countries are all developing countries, and they provide opportunities for each other," Li said.

"The relations between Latin America and China, and ties between the Caribbean and China are important parts of South-South cooperation," Li said, noting that "strengthening cooperation among these countries accords with their common interests, and helps preserve regional and international stability and prosperity."

Li said he hoped that Trinidad and Tobago would continue its constructive role in promoting ties between Latin America and China, and relations between the Caribbean and China."

Rowley said both countries had maintained sound momentum of development since the establishment of bilateral ties.

Rowley said Trinidad and Tobago firmly adhered to the one-China policy and was willing to consolidate the political foundation of bilateral relations, and enhance pragmatic cooperation to realize common development. He thanked China's support to his country over the years.

Trinidad and Tobago is ready to boost cooperation with China in areas including the Belt and Road Initiative, health and finance to promote bilateral ties to a new high, Rowley said.

Prior to the talks, Li held a welcoming ceremony for Rowley.

After the talks, they jointly witnessed the signing of documents concerning bilateral cooperation in economy and technology, health care and human resources.

Rowley also laid a wreath at the Monument to the People's Heroes in downtown Beijing.