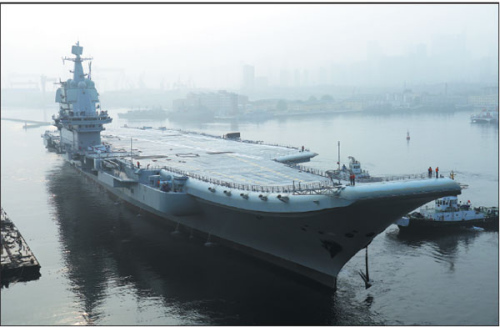 Compared with the Liaoning, China's first aircraft carrier, the first domestically built aircraft carrier 001A is a more advanced vessel in many respects. For example, its hull not only has been designed by Chinese engineers and designers, but also incorporates the latest technology.

Besides, the 001A's hangar, island (the superstructure of the carrier such as bridge and flight control tower), as well as ammunition lift have all been improved, and different sections of the vessel, such as the radar and electronic systems, better merge with each other. Thus it would not be an exaggeration to say the 001A marks a giant step forward compared with the Liaoning.

However, there is no truth to some Western media outlets' claim that an arms race is underway simply because China has built its second aircraft carrier. There is only one reason for China to strengthen its naval power: self-defense, that is, to defend its maritime boundaries and overseas interests.

Besides, from the First Opium War in 1840 to the founding of the People's Republic of China in 1949, China was invaded by Western powers from the sea more than 470 times. As a result, generations of Chinese have wanted China to build a strong navy to prevent such invasions.

Navy won't be built beyond capacity

China's second aircraft carrier will improve the fighting capability of the People's Liberation Army Navy much more than what the Liaoning did. The reason: the Liaoning is more for scientific research than for combat and training purposes.

Besides, the fact that China can independently design and build an aircraft carrier reflects the huge progress the country's military industry has made. Therefore, it is fair to see the 001A as a new starting point of China's rising naval power. The use of advanced technologies to independently build an aircraft carrier will hopefully help China sharpen its technology edge.

Some Western media outlets have used the 001A to hype up the "China threat" theory. China does not need two aircraft carriers, they say. In fact, when the Liaoning sailed on its first voyage, they said China did not need any aircraft carrier at all.

That their intention is to weaken the PLA Navy is clear. Anyone with a common sense can see their statement is ridiculous. Just look at how many maritime interests China has: defending maritime boundaries, maintaining peace and stability along the two routes of the Belt and Road Initiative, and ensuring smooth maritime transportation. It cannot meet all these requirements with only aircraft carrier.