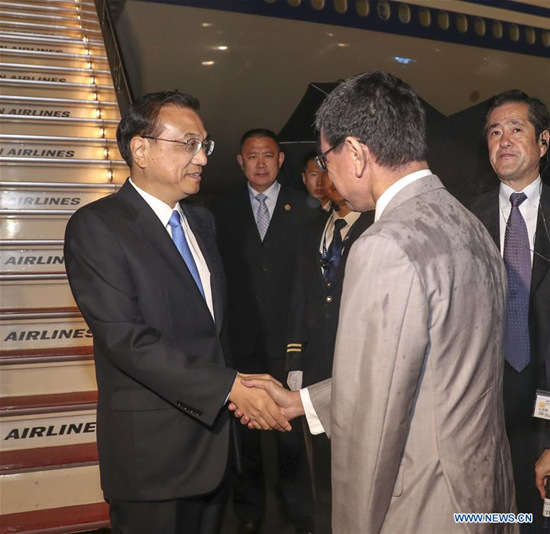 Chinese Premier Li Keqiang arrives in Tokyo, capital of Japan, for an official visit to Japan and the 7th China-Japan-Republic of Korea (ROK) leaders' meeting, May 8, 2018. (Xinhua/Pang Xinglei)

Chinese Premier Li Keqiang arrived in Tokyo on Tuesday for an official visit to Japan and the 7th China-Japan-Republic of Korea (ROK) leaders' meeting.

Li's visit to Japan is the first by a Chinese premier in eight years, coinciding with the 40th anniversary this year of the signing of the China-Japan Treaty of Peace and Friendship.

This year also marks the 10th anniversary of the China-Japan-ROK trilateral meeting outside the framework of the Association of Southeast Asian Nations.

Upon his arrival in Tokyo, Li voiced his hope that on the trilateral meeting, which resumed after two and a half years, the three countries will cement trust and seek cooperation, and contribute to regional development, prosperity and peace.

During his stay, the Chinese premier will hold talks with Abe and meet with Japanese Emperor Akihito. He will also meet with leaders of the Diet as well as heads of ruling and opposition parties.

Li will attend a reception commemorating the 40th anniversary of the signing of the China-Japan Treaty of Peace and Friendship and deliver a speech.

"It is worth cherishing the hard-won momentum for the improvement of China-Japan relations," he said, adding that bilateral ties face important opportunities for improvement and development.

"Through the visit, I expect to review the spirit of the treaty together with the Japanese side, learn from history and look up to the future. China and Japan should make joint efforts to meet each other halfway, promote bilateral relations back to the normal track, and achieve stable and sustainable growth," Li said.

The trip will also take Li to Japan's northern island of Hokkaido, where he and Abe will attend a China-Japan Governor Forum, and tour a high-tech exhibition at a local Toyota factory.

It is the second leg of Li's first overseas trip since the new cabinet took office in March. He visited Indonesia before arriving in Tokyo.