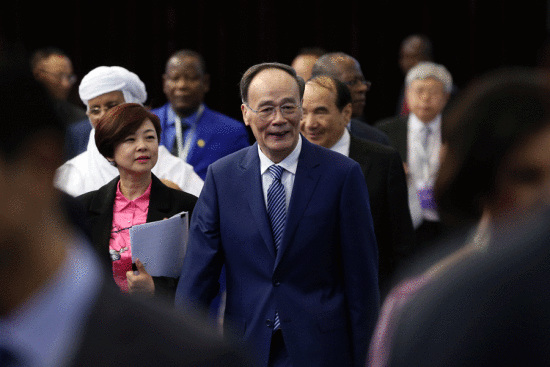 Vice-President Wang Qishan attends the Third Forum on China-Africa Local Government Cooperation in Beijing on Tuesday. About 400 people were attracted to the forum. (WANG ZHUANGFEI/CHINA DAILY)

China will support Africa's development by passing along experiences from its own development, Vice-President Wang Qishan said on Tuesday in Beijing.

"It will promote the implementation of the China-Africa comprehensive strategic partnership of cooperation," Wang said.

The two-day forum that started on Monday was attended by about 400 people from government and private organizations. It was co-hosted by the Chinese People's Association for Friendship with Foreign Countries and the United Cities and Local Governments of Africa.

Wang said China will unswervingly implement the mutually beneficial opening-up strategy to realize the rejuvenation of the Chinese nation.

China is still a developing country, he said, adding that unbalanced and inadequate development remains a major contradiction.

China still faces the arduous task and challenge of winning the tough battle against targeted poverty and ensuring the impoverished people will not be left behind in the nationwide pursuit of a moderately prosperous society, he said.

Bilateral trade volume between China and African nations reached $170 billion last year, and China's growth in imports from Africa is up 32 percent. Between them, they have established 135 "sister ties" at provincial and city level.

Salim, also chairman of the Tanzania-China Friendship Promotion Association, said Tanzania hopes to strengthen communication at the local level with China to improve the governance system as well as to serve the people.

Wang also met with Rafini and Salim separately on Tuesday.

While meeting with Rafini, Wang said enhancing bilateral cooperation and promoting common development are shared hopes of China and Niger.

Rafini said that Niger is happy to see China's growing importance in the international community and hopes to learn from China's development experience.

While meeting with Salim, Wang said China would like to promote bilateral ties to move forward through concrete cooperation projects.

Salim said he hopes the countries will deepen exchanges and cooperation at all levels and continue to consolidate and develop their traditional friendship.