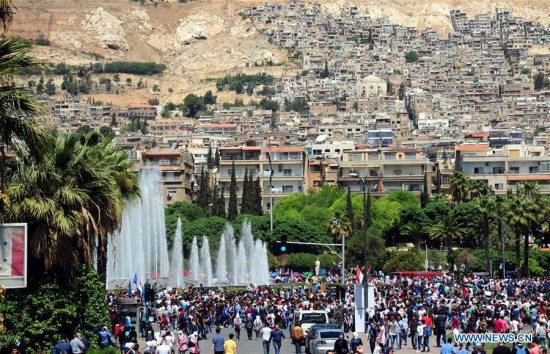 Syrians gather during a pro-government rally held at the Umayyad Square, in Damascus, Syria, on April 16, 2018. Thousands of Syrians in Damascus thronged the Umayyad Square celebrating the military victory in Eastern Ghouta despite the U.S.-led attack on Syrian military positions. (Xinhua/Ammar Safarjalani)

U.S., British and French leaders faced challenges and criticism from lawmakers following a U.S.-led airstrikes on Syria while protests across the three countries were held against the attack.

The British opposition has challenged Prime Minister Theresa May over her authorizing military strikes on Syria without consulting parliament, with the Labour Party leader calling for a U.S.-like War Powers Act.

Jeremy Corbyn, leader of the main opposition Labour Party, told May that she should be accountable to the parliament and "not to the whims of the U.S. president."

Corbyn called for a War Powers Act like the one in the United States to limit the president's ability to take military action abroad, to ensure that Britain takes future military action only with the parliament's approval.

While defending her decision to join the U.S.-led airstrikes on Syria Saturday, May on Monday also refused to give British lawmakers an assurance that she would seek parliamentary approval before any further strikes on Syria.

May said her government had to intervene rapidly following reports of an alleged chemical attack in the Syrian town of Douma on April 7. The United States, Britain and France, which carried out the airstrikes, said they were targeted against the Syrian government's alleged chemical weapons attack capabilities.

As cited by local media, Marine Le Pen, leader of the far-right National Front, said Macron had not published any evidence of the alleged use of chemical weapons by the Syrian government.

The airstrikes occurred even before a fact-finding mission of the Organization for the Prohibition of Chemical Weapons had arrived in Damascus to investigate the Douma attack.

While political leaders worldwide called for a de-escalation in war-torn Syria and a political settlement, in the U.S. cities of New York, Los Angeles and Portland, protests were held over the weekend against the U.S.-led airstrikes.

Demonstrators called for enough time to be given for an international investigation into the Douma attack and some questioned the legitimacy of the military attack on Syria.

Tim Tredstone, a protester in Los Angeles, said he felt tired of the war in the Middle East. "It is endless; it never stops; it doesn't serve the interest of the United States," he said.

British people also organized anti-war rallies against the bombing on Syria in the cities of London, Liverpool, Manchester and others.