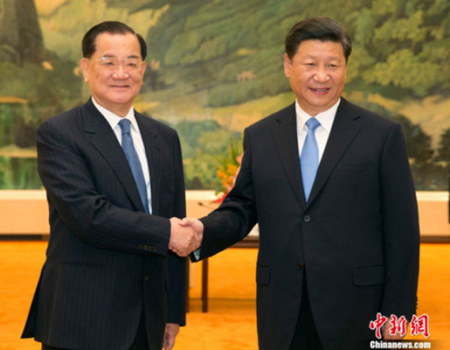 Xi Jinping, general secretary of the Communist Party of China (CPC) Central Committee, on Tuesday called on people of the mainland and Taiwan to remember history, unite to safeguard peace, and promote cross-Strait relations and national rejuvenation.[Special coverage]

Xi made the remarks while meeting with Lien Chan, former chairman of the Kuomintang (KMT), Taiwan's ruling party, and other island officials.

A Taiwan delegation is in Beijing to attend events to commemorate the 70th anniversary of the end of World War II and the victory of the Chinese People's War of Resistance against Japanese Aggression.

The victory in the counter-Japan war is "China's first complete victory against foreign invasion in modern times," Xi said, adding the achievement was made through the struggle of the entire nation, including residents of Taiwan.

The CPC and the KMT jointly established a counter-Japan united front to to safeguard state sovereignty and national dignity with blood and lives, he said.

"Both the front-line battlefield and the battlefield behind enemy lines closely coordinated with each other and made important contributions to the victory," Xi said, adding the history will forever remember the revolutionaries.