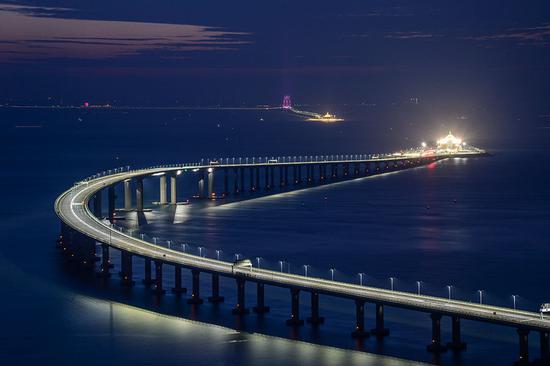 The Hong Kong-Zhuhai-Macao Bridge and tunnel seen on Sunday, as final preparations were made for its opening on Wednesday. (Photo by Vincent Chan/ for China Daily)

The 55-kilometer Hong Kong-Zhuhai-Macao Bridge, scheduled to open for traffic on Wednesday, will provide a crucial boost to the development of the Guangdong-Hong Kong-Macao Greater Bay Area, analysts said.

As the first road link to span the Pearl River Estuary, the bridge and tunnel will energize the regional economy and integrate cities from both sides of the estuary into one dynamic community.

The Bay Area, in the Pearl River Delta, encompasses nine cities in Guangdong province plus the two special administrative regions of Hong Kong and Macao.

Last year, the total GDP of those 11 cities reached 11.7 trillion yuan ($1.69 trillion). That means 5 percent of the nation's population contributed over 14 percent of country's GDP in 2017.

Like the San Francisco Bay Area in the United States, the strategy behind the development of the Bay Area in China was to merge the 11 cities into a world-class city cluster, able to compete on a global scale.

"The HZMB is one of the most important elements of the development of the Bay Area," said Jason Ni Mengcheng, an assistant professor in the Department of Architecture and Civil Engineering at City University of Hong Kong. Ni specializes in research into large transportation infrastructure.