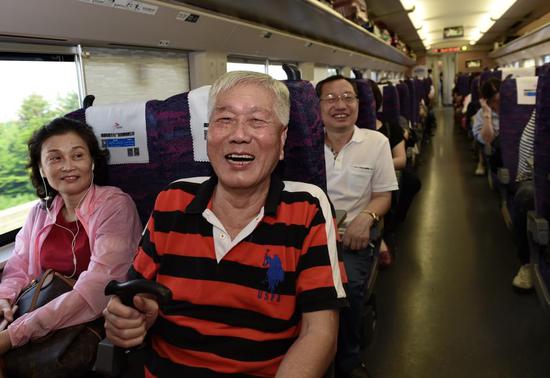 When the first high-speed train rolled out of West Kowloon Station in Hong Kong at 7 am on Sunday, it marked a major step in the rapidly evolving Guangdong-Hong Kong-Macao Greater Bay Area development initiative.

The Hong Kong section of the Guangzhou-Shenzhen-Hong Kong Express Rail Link, also known as XRL, is only 26 kilometers long.

But it means travelers can make the trip between the heart of Hong Kong and the central business district in Shenzhen, Guangdong province, in 14 minutes. And Guangzhou, the provincial capital, is only about 50 minutes away.

It eliminates almost an hour of travel time compared with other forms of transportation such as intercity trains or cross-boundary buses.

More than 300,000 tickets were sold on Sunday, when 10 local tour groups left from West Kowloon for various mainland destinations, according to MTR Corp, the link's operator.

The new railway is expected to carry 80,100 cross-boundary passengers daily by the end of this year, officials with the Hong Kong Transport and Housing Bureau said.

Carrie Lam Cheng Yuet-ngor, chief executive of the Hong Kong Special Administrative Region, said that with the combined effect of a series of cross-border infrastructure projects, including the XRL, the Hong Kong-Zhuhai-Macao Bridge and the third runway for Hong Kong International Airport, Hong Kong will have a better connection with the Bay Area and support the area's development by optimizing the flow of talent, goods and information.

Located in the Pearl River Delta, the Bay Area comprises nine cities in Guangdong, plus Hong Kong and Macao.

Last year, the total GDP contributed by all 11 cities in the region stood at 11.7 trillion yuan ($1.7 trillion), meaning that 5 percent of the national population contributed more than 14 percent of GDP in 2017.