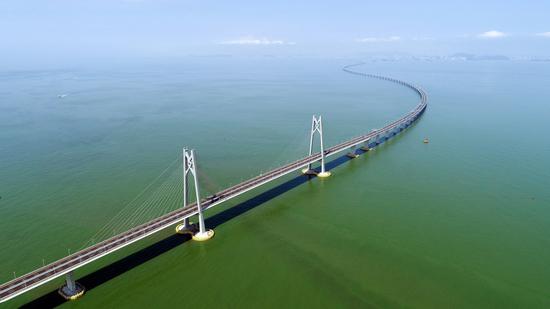 The Hong Kong-Zhuhai-Macao Bridge connecting the east and west sides of the Pearl River Delta in South China will officially open on Tuesday, the liaison office of the central government in the Hong Kong Special Administrative Region revealed on Wednesday.

The confirmation of the opening details for the mega bridge intensified the anticipation that had been building for weeks across the Guangdong-Hong Kong-Macao Greater Bay Area, whose development is expected to receive a major boost from the bridge.

The ceremony will be held indoors on Tuesday in Guangdong province, on an artificial island, home to Zhuhai port, a source familiar with the matter told China Daily. After the ceremony, the bridge is expected to open for traffic later in the day, the source said.

The HZMB, more than a decade in the making, is a 55-kilometer-long bridge-island-tunnel complex across the Pearl River Delta. The project also includes a 6.7-km undersea tunnel. The tunnel links to the bridge via two artificial islands.

Lin spent 12 years on the construction of the sea crossing. He said he's more than happy to see it finally serve its intended purpose and open to cross-boundary traffic.

The main bridge, located in Chinese mainland waters, will be managed by the Hong Kong-Zhuhai-Macao Bridge Authority located in Zhuhai, which is jointly founded by the governments of Guangdong, Hong Kong and Macao in 2010.

Meng Fanchao, a major designer of the bridge, couldn't conceal his excitement on Wednesday. He said he felt like a proud parent as his child will soon shoulder immense responsibilities, serve society and stand the test of real-life challenges.

Meng is highly confident in the safety and quality of the bridge. He said the bridge held strong during many tests, including the ravages of two severe typhoons in 2017 and 2018.

According to government documents, the ports in Hong Kong, Zhuhai and Macao, built and managed by the respective local governments, will be open 24 hours daily.

Zhuhai and Macao will cooperate to implement a one-off customs clearance in the two ports, allowing travelers to finish the exit and entry process in one operation.

The total cost to build HZMB is about 120 billion yuan ($17.3 billion). The burden is shared in different proportions by the Hong Kong, Zhuhai and Macao governments, in accordance with an assessment of prospective economic benefits for the three cities.

Lo Wai-kwok, a Hong Kong lawmaker representing the engineering constituency, hailed the bridge and expressed excitement over its scheduled opening. The former president of the Hong Kong Institution of Engineers said he organized several visits to the bridge in the past few years.

"It may go down in history as a masterpiece in modern engineering," he said.

Lo, also chairman of the Business and Professionals Alliance for Hong Kong, predicted the bridge's opening will boost economic development in the Greater Bay Area, facilitating the flow of people, goods, capital and services in the region.