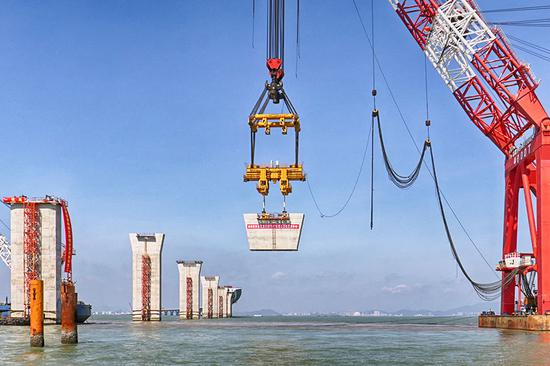 All supports were completed in 2015. (Photo/Xinhua)

Antony Leung Kam-chung, Hong Kong's former financial secretary from 2001 to 2003, participated in the SAR government's initiative to build a bridge connector prior to 2003.

A study of the Pearl River Delta at that time showed that foreign and Hong Kong investors would be most attracted to locales within three hours of Hong Kong, Leung said.

Development still lags in places like Zhuhai and Jiangmen, which are farther away, on the western side of the delta, he continued.

Once the bridge opens, and with the Guangzhou-Shenzhen-Hong Kong Express Rail Link now operational, he predicted more investment will flow westward as far as the Guangxi Zhuang autonomous region.

Lin Ming, chief engineer of the bridge's island and tunnel project, said the HZMB will create more urban areas in the Bay Area, given that urbanization is stimulated in coastal regions.

"The delta in Guangdong is a perfect site for metropolises," Lin said. "Sustainable development in the delta requires more transportation infrastructure－the more, the better."