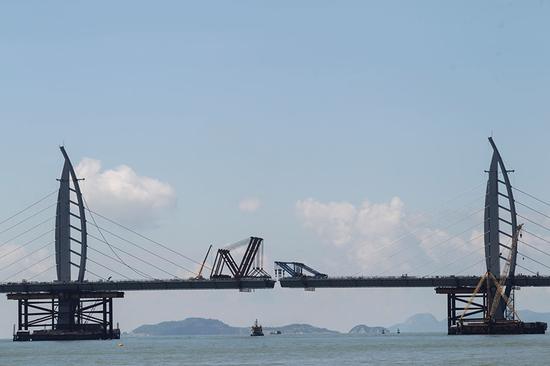 Its two sections were joined in 2016. (Photo by Zhong Fan/for China Daily)

The HZMB also will serve as an example for future cross-border cooperation under the "one country, two systems" principle. The project was a cross-border effort, shared by the governments of Guangdong, Hong Kong and Macao.

Su Yi, head of the Working Group on Cross-boundary Policy Research for bridge operator HZMB Authority, said the cooperation and coordination among the three governments opened a door for institutions under different political systems and cultures to conduct more exchanges.

It has laid a foundation for the three administrations to have more cooperation in the future development of the Bay Area, he said.

Better communication within the Bay Area will start with the easier flow of capital trading and the innovation of policies, Su said. But ultimately, it's about the connection between people from different backgrounds, he said.

Gavan Ord, manager of business and investment policy for CPA Australia, a global accounting body, said that it helps change people's mindsets in terms of business activities with Macao, Zhuhai and other cities on the western coast of the estuary.

"With the opening of the HZMB, you feel that you are closer to the other side of the ocean, and it helps integrate separate communities into one," Ord said.