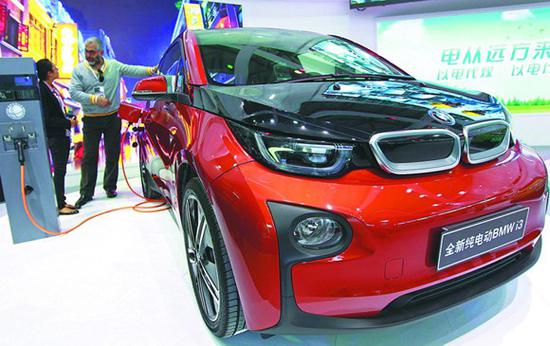 A representative shows how to charge up a BMW i3 electric car at an auto show in Shanghai. （Photo/Xinhua）

Over the past months, many new energy vehicle (NEV) manufacturers in China have found themselves in an unfamiliar situation: sales continue to increase, but profits are significantly declining.

In the first quarter of 2018, 143,000 NEVs were sold in China, up 154 percent compared with the same period last year, according to Ministry of Industry and Information Technology.

However, BYD, a leading NEV carmaker in China, posted a profit of 102 million yuan (16.2 million U.S. dollars), down 83 percent compared with the same period last year.

These companies attributed the profit drop to the phasing out of subsidies, which the government started to offer in 2010 to stimulate the popularity of NEVs.

Driven in part by the favorable policies, as well as growing demand from environmentally-conscious customers, annual production and sales of NEVs in China topped the world from 2015 to 2017. By the end of 2017, cumulative sales exceeded 1.8 million, accounting for more than half of the global total.

At the same time, however, some NEV makers began making fraudulent applications in order to receive subsidies, which hurt the interests of the customers and created chaos in the market.

In December 2016, a number of Chinese ministries jointly issued a policy to reduce purchase subsidies for buyers of NEVs, except fuel cell electronic vehicles, by 20 percent in 2019 and 2020.

This February, they announced a further subsidy cut of 30 percent for electricity vehicles during the February-June period.

The policy change has prompted some new energy automakers to take actions to minimize the negative impacts.

BAIC BJEV, another leading NEV company in China, initiated a program in November last year that allowed customers to swap or recycle batteries, in a bid to enhance their utility rate.

"To boost our competitiveness, BAIC will also unveil a new marketing model this year to cut the purchase cost of cars and enhance battery efficiency," said Li Yixiu, vice general-manager of the company.

For its part, BYD has put a lot of efforts into developing models that meet the new criteria for government subsidies, as well as ones with enhanced energy density and better battery efficiency.

Despite significant decline in profit, many executives of Chinese automakers said they remain positive about their companies' prospects as well as the NEV market in the country.

"Market pressure has forced us to enhance our competitiveness. We are very confident about our technology, production chain, and strategies," said Hu Enping, chief brand officer of BAIC BJEV.