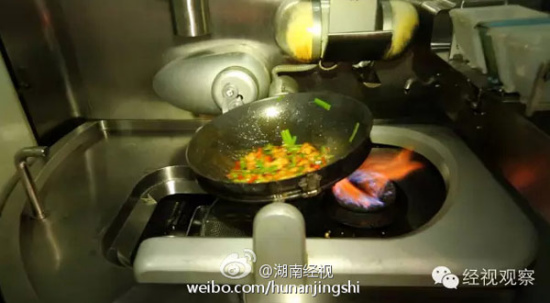 Standardized Hunan cuisine robot chefs, the first of their kind, started cooking local dishes at a restaurant in Changsha city, Central China's Hunan province, on May 1, icswb.com reported on Monday.

The robots, which store recipes and cooking techniques for 40 kinds of Hunan cuisine, could complete cooking capsicum fried meat in two minutes. "We want our customers to enjoy not only the dishes, but also the technically standardized robot cooking," said Li Zhiming, 45, inventor of the robots and owner of the restaurant.

With standardized robot chefs, Li hoped that Hunan cuisine robot restaurants could open worldwide, like KFC and McDonalds in the future.

"In Changsha city, restaurants whose sizes are similar to ours have to hire eight to 10 cooks and kitchen helpers. While in our restaurant, we only need two kitchen helpers to aid three robot chefs," Li said.

Kitchen helpers at Li's restaurant put ingredients into seasoning boxes, vegetables and meat in designated boxes, and press the "ON" button. The robot chef is responsible for cooking and cleaning the cookers.

It is not an easy feat to design these multi-functional robot chefs. Li has spent around four years and nearly ten million yuan ($1.6 million) inventing one.

A common viewpoint in the international catering industry is the main reason Chinese cuisine cannot be widely popularized is it's hard to decide how much of each ingredient should be used in cooking.

Since 2015, Li has led a research and development group to invent a standardized Hunan cuisine robot.

To make a robot that can cook authentic Hunan cuisine, Li's team learned recipes from Hunan cuisine masters, carefully studying ingredients and cooking skills. At last, they chose 40 classic local dishes from more than 200 to build a database.

Li said tons of ingredients have been consumed in the invention of the robot chef, because each dish has its own standard recipes and cooking process.

"For each steamed rice in clay pot dish, we fix 300 grams of rice and 250 grams of vegetables," said Chang Le, one of Li's partners.

In November 2017, a Hunan cuisine robot chef was invented, and creators applied for several patents.

At present, Li's restaurant can sell more than 800 bowls of rice with Hunan local dishes on top per day. Li hopes his restaurant will open up branches in Beijing, Shanghai, Guangzhou and even overseas cities in the future.