Health of wetland a priority of Tibet 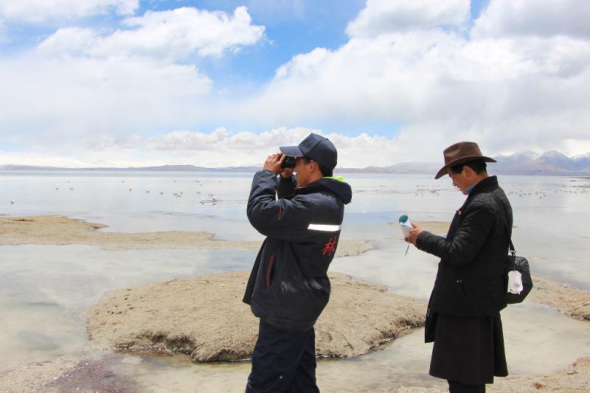 Pema Wanggyal (R) and Losang Tashi (L), two rangers of Lake Manasarova in Tibet, during their patrol around the lake, May 10, 2018. (Photo by Ma Chi/chinadaily.com.cn)

Pema Wanggyal used to be an ordinary herdsman living in Shongpa, a small village at the side of Lake Manasarova. Three years ago, he was assigned a new job - a ranger of the "holy lake". Pema's job involves protecting wildlife and natural environment around the lake from being harmed.

In summer, Pema patrols the lake on motorcycle every two or three days, and every patrol mission takes three to four hours. During the 30-kilometer journey, he stops now and then to observe through a binocular if there are dead animals or grasslands being damaged. He also collects trash discarded by tourists and pilgrims.

The 30-year-old is one of the 18 rangers at the Jiwu Protection Station at the Lake Manasarova Wetland Preserve. To protect the fragile eco-system of the wetland, six such protection stations have been installed in the preserve.

Sitting at Purang county in Ngari prefecture of Tibet, the Lake Manasarova is 4,500 meters above the sea level and the melted snow water from the Gangdise Mountains overlooking the lake is the source of Yarlung Zangbo River and the Ganges River.

The wetland is also a key "climate regulator" in the plateau area and is home to more than 400 wild creatures, including iconic species such as white-neck crane and Tibetan wild donkey, according to Tsewang Tengyal, deputy head of the Purang forestry bureau.

Enshrined as "holy lake and sacred mountain" along with the Mount Kailash (or Gang Rinpoche, the highest of peak of the Gangdise Mountains), the Lake Manasarova attracts a large number of pilgrims as well as tourists from home and abroad every year, especially in summer.

"I feel a big responsibility on my shoulder as the Lake Manasarova represents not only the image of Shongpa village, but also that of Tibet and China," said Pema.

"What I am doing is preserving the beautiful environment of the 'holy lake' for the future generations," he said.

However, visitors bring not only incomes for local villagers but also threats to Lake Manasarova's natural environment.

"Some visitors throw away trash such as old clothes and bottles, and fishing and poaching of birds also happens sometimes," said Guru Tesring, a villager of Shongpa.