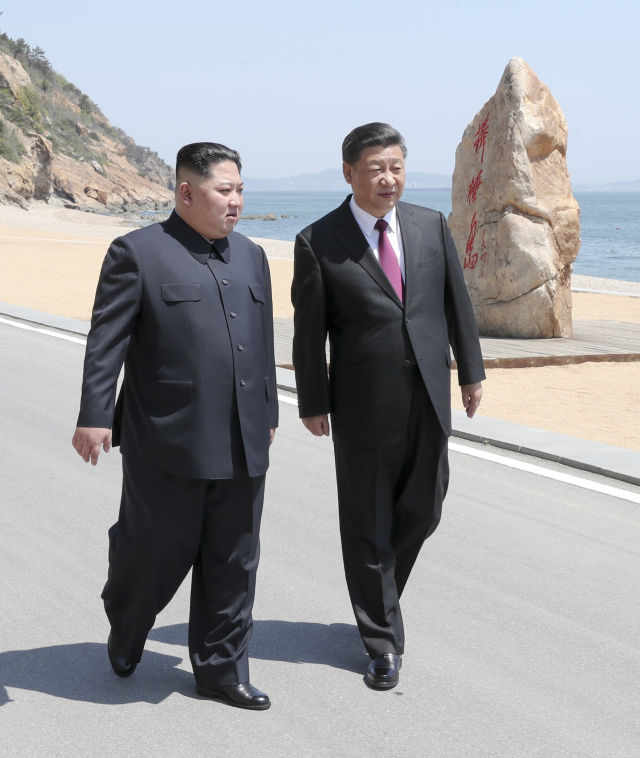 Xi Jinping (R), general secretary of the Central Committee of the Communist Party of China (CPC) and Chinese president, holds talks with Kim Jong Un, chairman of the Workers' Party of Korea (WPK) and chairman of the State Affairs Commission of the Democratic People's Republic of Korea (DPRK), in Dalian, northeast China's Liaoning Province, on May 7-8. (Xinhua/Xie Huanchi)

"Comrade General Secretary and I have carried on this fine tradition to hold the historic meeting with fruitful outcomes, and promoted the unprecedentedly vigorous development of the DPRK-China relations," he said.

Kim said that he believes his second meeting with Xi after more than a month will deepen mutual trust and push the friendly and cooperative DPRK-China relationship to achieve an even closer and comprehensive development in line with the demands of the new era.

Talking about the situation of the Korean Peninsula, Xi said he and Kim fully exchanged views and reached important consensus during their first meeting, adding that Kim has recently made active efforts to promote dialogue and easing of tension on the peninsula with constructive progress being made.

He noted that with joint efforts from relevant parties, the momentum of dialogue and alleviation of tension on the peninsula is being consolidated in the direction that is conducive to a political solution.

China supports the DPRK's adherence to the denuclearization of the peninsula, and backs the dialogue and consultation between the DPRK and the United States for resolving the peninsula issue, Xi said.

"China is willing to continue to work with all relevant parties and play an active role in comprehensively advancing the process of peaceful resolution of the peninsula issue through dialogue, and realizing long-term peace and stability in the region," he said.

Speaking highly of Xi's profound vision and extraordinary wisdom, Kim expressed his gratitude to China for its long-standing and significant contribution to realizing denuclearization on the Korean Peninsula and safeguarding peace and stability in the region. It has been the DPRK's consistent and clear stand to achieve denuclearization of the Korean Peninsula, Kim said. As long as relevant parties abolish their hostile policies and remove security threats against the DPRK, there is no need for the DPRK to be a nuclear state and denuclearization can be realized, he said.

Kim expressed the hope that the DPRK and the United States would build mutual trust through dialogue and relevant sides would take phased and synchronous measures in a responsible manner so as to comprehensively advance the political settlement of the Korean Peninsula issue and eventually achieve denuclearization and lasting peace on the peninsula.

Kim briefed Xi on the latest developments and Party building in the DPRK.

Xi said the Third Plenary Meeting of the Seventh WPK Central Committee advanced a strategic line of concentrating all efforts on socialist economic construction, and announced the decision to discontinue nuclear tests and intercontinental ballistic rocket test-fire and dismantle its northern nuclear test ground, which shows the great importance Kim attaches to developing economy and improving people's livelihood and the resolute determination to safeguard regional peace and stability.

China appreciates the move, and supports the DPRK in shifting its strategic focus to economic construction and the DPRK comrades in taking a development path suitable to their own national situation, Xi said.