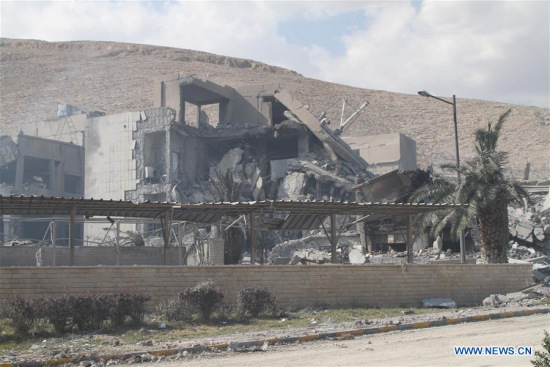 Photo taken on April 14, 2018 shows relics of the Scientific Research Center in the Barzeh neigborhood of northeast of Damascus, after United States, Britain and France carried out a wave of joint airstrikes on Syrian military facilities. The U.S., along with its allies Britain and France, launched missile strikes on Syrian military positions earlier on Saturday. (Xinhua/Monsef Memari)

World leaders have adhered to the call for de-escalation in war-torn Syria and political settlement, following the U.S.-led tripartite military attacks on alleged chemical weapons facilities in the nation.

The strikes, launched by the United States along with its allies Britain and France before daybreak Saturday, followed reports of suspected chemical weapons use in Douma district on the outskirts of Syrian capital Damascus on April 7.

The Syrian government has strongly denied the allegation, calling for the Organization for the Prohibition of Chemical Weapons to send a fact-finding mission for investigations. However, the three nations carried out the strike on the day the mission just arrived in Damascus.

The United Nations Security Council on the same day held an emergency meeting over the missile attacks at Russia's request, but failed to approve a resolution condemning the bombardment.

On Sunday, Russian President Vladimir Putin and his Iranian counterpart Hassan Ruhani condemned the airstrikes over phone, agreeing that the "illegal action seriously damages the prospects for a political settlement" in the war-torn country, according to a Kremlin statement.

"Putin in particular stressed that if such actions, carried out in violation of the UN Charter, continue, it will inevitably lead to chaos in international relations," the statement said.

Meanwhile, French President Emmanuel Macron said he was ready to talk to all, including Russia and Iran, to pave the way for inclusive political transition in the war-torn Syria.

"I say it from the beginning, to build lasting peace, one needs to dialogue with Iran, Russia and Turkey. France's policy is to talk with everyone. It's the condition to have peace," Macron told French news outlets on Sunday.

The just-concluded yearly Arab League (AL) Summit on Sunday reiterated that political solution is the only path for Syria to realize peace. Only eliminating terrorist groups and cutting off world powers' meddling could create chance for Syrian people to build an independent Syria.

The AL, at the summit held in eastern Saudi city of Dhahran, also denounced the use of chemical weapons in any place, requiring an international investigation in accordance with international regulations into any such case.

At the meeting, Jordanian King Abdullah II said the Syrian crisis should be resolved through political negotiation other than any military action which could escalate regional conflicts.

In this regard, the Astana talks only involving Russia, Iran and Turkey, which was brokered last year for a political settlement of the Syrian conflict, cannot replace the UN-backed Geneva talks which have more global parties, he added.

Also at the meeting, the Kuwaiti Emir Sheikh Sabah Al-Ahmad Al-Jaber Al-Sabah regretted that double standard was applied in the Syrian issue, saying Kuwait will not hesitate to offer humanitarian aid to east the agony of Syrian people.

The African Union (AU) Commission on Sunday called on world powers to undertake international efforts to find lasting solutions to the Syrian civil war that respect the country's territorial integrity and serves the interests of Syrian people.

In a press statement, it said "Africa expects the United Nations Security Council (UNSC) members, especially those that are permanent, to put aside their differences and spare no efforts in the pursuit of global peace and humanity's common good, in line with the responsibilities conferred upon them by the United Nations Charter."

It further said "any response" to the alleged poison gas attack "ought to be based on incontrovertible evidence gathered by a competent, independent and credible entity and comply strictly with international law, including the primacy of the UNSC for any recourse to force."