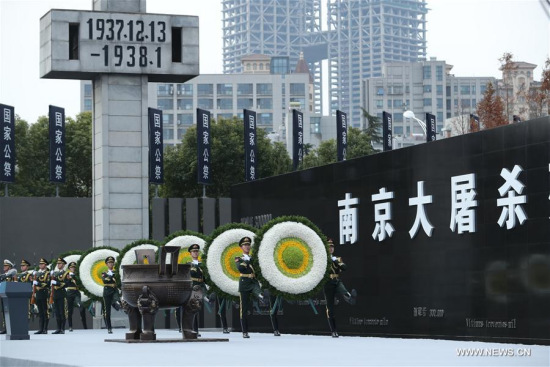 Some other senior officials were also present at the ceremony held in the square of the Memorial Hall of the Victims in Nanjing Massacre by Japanese Invaders in the eastern city of Nanjing in Jiangsu Province.

At the ceremony starting at 10 a.m., Xi and the senior officials joined about 10,000 representatives of all walks of life and paid silent tribute to the massacre victims as sirens howled over the city.

Eight large wreaths were presented to the memorial altar by guards of honor, followed by 80 teenagers reading out a declaration of peace.

Japanese troops captured Nanjing, then China's capital, on Dec. 13, 1937 and embarked on more than 40 days of slaughter. About 300,000 civilians and unarmed Chinese soldiers were brutally murdered, and over 20,000 women were raped.

In a speech at the ceremony, Yu Zhengsheng, chairman of the National Committee of the Chinese People's Political Consultative Conference, said China was holding the memorial ceremony in honor of the Nanjing Massacre victims, compatriots killed by the Japanese invaders, national heroes who sacrificed their lives for victory, as well as international soldiers and friends who joined the Chinese in fighting.

"The commemoration is meant to proclaim the Chinese people's firm stance on maintaining peace and their sublime aspiration for peaceful development," he said. "War is a mirror, which makes people better understand the value of peace."

China and Japan should take into consideration the fundamental interests of their people and contribute to peace, he said.

"The world should work together to maintain international order and system with the purposes and principles of the United Nations Charter at the core," Yu said.

He said Chinese people are willing to work with people from around the world in building "a community with a shared future for mankind," make contributions to world peace and global development, and uphold international order.

Following his speech, six Nanjing citizens struck the Bell of Peace at the site, while 3,000 doves signifying peace flew over the memorial square.

After the ceremony, President Xi visited the exhibition in the memorial hall and signed his name on the visitors' book.

He also met some survivors of the massacre and relatives of foreign friends who contributed to the victory in the Chinese People's War of Resistance Against Japanese Aggression.

The ceremony was presided over by Huang Kunming, head of the Communist Party of China Central Committee Publicity Department.

Veterans, officials from central and local Party and government departments and the military, representatives of the non-Communist parties, personnel without Party affiliation, people from Hong Kong, Macao and Taiwan, relatives of foreign friends, foreign diplomats, survivors, and victims' relatives attended the event.

Yu, chairman of the National Committee of the Chinese People's Political Consultative Conference, made the remarks while addressing the state memorial ceremony to mark the 80th anniversary of Nanjing Massacre.

War is a mirror, which makes people better understand peace than ever, Yu said.

"To avoid any repeat of the historical tragedy, we must make unremitting efforts for the lasting and even eternal peace of mankind," he said.